Report: A featherweight title rematch between Alexander Volkanovski and Max Holloway is being targeted for the inaugural pay-per-view event on Fight Island on July 11.

Per Ariel Helwani of ESPN, a featherweight title rematch is being targeted for the first pay-per-view event on Fight Island with reigning champion Alexander Volkanovski taking on long-time former champion Max Holloway on July 11.  This will be their first fight since facing each other last December.

Alexander “The Great” Volkanovski (21-1) has been on an impressive win-streak for many years, but only recently has he started to take the MMA world by storm.  A professional since 2012, Volkanovski suffered his only professional loss in the fourth fight of his career and has since reeled off an impressive 18 straight victories.  The Australian native joined the UFC in 2016 and notched six victories before his break-out year in 2019.  He leapt into the title picture by defeating Brazilian legend and former champion José Aldo in his home country.  The victory secured him his shot at the undisputed title in December where he claimed the championship with a shut-out victory of longtime title holder Max Holloway.

Max “Blessed” Holloway (21-5) had been on the cusp of all-time great status going into 2019.  The former champion put together an incredible ten fight win-streak before getting his first shot at undisputed UFC gold in 2017.  Holloway would go on to win the championship and defend it with victories against longtime champion José Aldo (twice) and previously undefeated top contender Brian Ortega.  In 2019, Holloway moved up in weight but fell short in a bid to win the interim lightweight title against Dustin Poirier.  “Blessed” returned to the featherweight division in July where he defended the belt against former champion Frankie Edgar before closing out the year with the loss to Volkanovski.

The rematch had been rumored for the summer prior to the coronavirus pandemic.  Per Helwani, the UFC is looking to add additional title fights to the event on Fight Island with the vacant bantamweight title fight between Petr Yan and José Aldo as well as the next title defense for Kamaru Usman being the front-runners for the card. 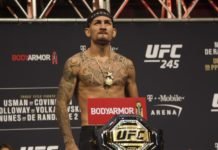