Heinisch clearly had a roller coaster of a week. The fighter was briefly pulled from the Las Vegas card after a cornerman was potentially infected with the novel coronavirus. However, the test was inconclusive, so while Heinisch was briefly replaced by Anthony Ivy, he was back on the card come Friday morning thanks to a second, negative test.

Speaking to media outlets including Cageside Press post-fight at the UFC Apex, Heinisch explained that the cornerman situation wasn’t the only impact the pandemic has had on him.

“I actually switched over to Thailand and then COVID hit. I was about two weeks into camp,” Heinisch said. “I had to come back back to Colorado. And I didn’t go back to my old camp because I just didn’t want the tension. And I wasn’t sure if I was going to take a fight.”

Of course, Heinisch did, going up against Gerald Meerschaert and earning a first round TKO. A win that snapped a two-fight skid for the Contender Series alum.

The situation fight week, however, was a little more chaotic. “It was wild. First they they were blowing up my phone, ‘Hey, your cornerman tested positive.’ They came and got him,” Heinisch recalled. “And then we sat down and we’re like, ‘How did this happen?’ We realized he was around all the other people too, a bunch of other fighters so the whole card was probably gonna flop.”

An entire card. And it might not be hyperbole. Neil Magny was pulled from media day ahead of UFC 250, put in isolation because of contact with Heinisch’s cornerman. While no other fighters appeared to be impacted to that extent, who knows what would have happened had a positive test been returned. Heinisch’s team, however, was confident that wouldn’t be the case.

“We’re like, there’s no way he has the positive. We found it was an inconclusive test, we got him retested, and the UFC did a great job.” The second test came back negative. Still, Heinisch found himself in the midst of a small hurricane. “I had to turn my phone off for like five hours because it leaked on the internet, and everyone was blowing me up. My fight was pulled. So I just had to stay focused. I was in the middle of cutting weight, and I had to keep cutting weight. I wanted to eat but I just stayed focused.”

Now that the chaos has abated, Heinisch is hoping to get back out to Thailand. “I have my fight and my wife’s like booked for early July. And supposedly the borders are gonna open a few days before that,” he said later in the evening during a virtual post-fight scrum. “So we’re keeping our fingers crossed. That’s still the plan, and we’re excited to get back out there.” 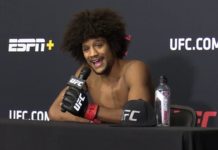