Raphael Assuncao is the man tasked with welcoming former bantamweight champ Cody Garbrandt back to the octagon at UFC 250.

The former champ is on a three-fight skid, two of those in back-to-back fights against the disgraced T.J. Dillashaw, currently out on a two year suspension for EPO. Assuncao, meanwhile, is on a two-fight losing streak of his own, making this a key fight for both men.

What sort of Cody Garbrandt shows up Saturday is a question. He no doubt still has his power, but Garbrandt can also be an emotional fighter at times. Which can play into the hands of his opponents. Raphael Assuncao, however, hasn’t given it much thought.

“I’m expecting that the best guy. That’s all I have in mind right now,” Assuncao said at Thursday’s UFC 250 media day. He’s not expecting any specific factors to stand out, just “the best guy possible on Saturday night.”

“Whatever he brings to the table, I’ll be ready.” For all the talk of Cody Garbrandt being emotional, “I don’t really care,” Assuncao added. “Whatever emotions he brings, whatever physicality he brings, I’ll be right there.”

UFC 250 almost feels like a showcase for the bantamweight division. Cory Sandhagen vs. Aljamain Sterling has been positioned as a title eliminator, but it’s Assuncao vs. Garbrandt that is the co-main event. And the Brazilian feels that a big win over the ex-champ could bump him up into title contention.

“I think a win in general will put me right right there in contention. I’ve been around a long time,” he said.

Of course, there are those who will criticize that as unearned. “They can say whatever they want,” Assuncao said of the critics. “I’ve been here a long time. I’ve been doing my job correctly for a long time despite some negative results. And I’m looking to get to contention.” 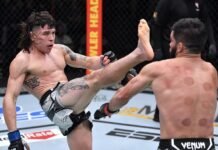 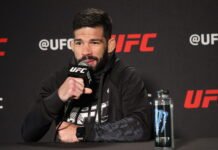 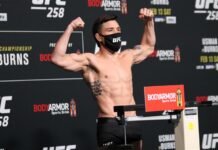