The first time Vicente Luque and Niko Price crossed paths, it was a wild brawl that led to a Luque stoppage. Their battle at UFC 249 lasted longer, but the victor remained the same.

When Niko Price wins, he tends to win bonuses. Prior to UFC 249, Price’s last three victories saw him take home Performance of the Night awards. Heading into a battle with Brazil’s Vicente Luque, however, it was consistency that was key.

Heading into their fight in Jacksonville, Price had traded wins and losses across his last six fights. Luque had found more success, however, running up a six-fight win streak before falling to Stephen “Wonderboy” Thompson last time out. And so UFC 249 posed the question, would it be Luque returning to his winning ways, or Price finally stringing a couple of wins together?

As expected, the punches started flying immediately. Both men mixed in leg kicks and Price clinched up to throw a few uppercuts. A slick combination landed for Price as Luque continued to pound the leg. Hooks connected both men, but Luque was getting the better of him, landing clean straight punches down the middle. Price came firing back with a combination, mixing a knee then a takedown. Price tried to wrap up a d’arce choke, which is coincidentally how Luque finished him the first time they fought. Luque broke free and was able to rock Price at the very end of the round.

Leather started flying again in the second round with Luque staying consistent with his kicks. A hard left hand landed for Luque, but then a kick landed below the belt. Action resumed after a quick pause, and Luque popped Price with a one-two combination. The leg kicks continued to accumulate for Luque. Price pushed forward and landed beautiful elbows. Luque fired back and Price was in trouble. Price snapped back with a head kick attempt but slipped. Both men continued to blast the other, but the leg kicks of Luque were making a difference.

Price landed a few jabs to start the final round, but was cracked by a combination from Luque. Price’s output was higher than Luque’s in the third as he constantly pushed forward in an attempt to make up for the first two rounds. Price shot in for a takedown, but Luque used a choke attempt to avoid it. Another heavy combo landed for Luque as neither man showed any weakness. A beautiful left hand landed for Luque and Price fell backward. Luque jumped on top and Price slowed him down with a triangle choke attempt. Luque ate some elbows from his downed opponent then stood up. The referee, Jason Herzog, paused the action to have the doctor take a look at Price’s eye, which was completely shut. The doctor took a close look and decided Price was better off not going on for the final 90 seconds.

DROPPED! 👊@VicenteLuqueMMA putting Price down in the third! #UFC249 pic.twitter.com/lTPVOJjIEW

After the fight, Price told Luque, “I think you got my orbital.” 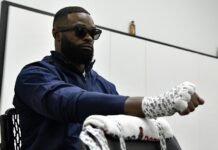