In a time of crisis, major players need to step up. And both the Professional Fighters League and embattled UFC light heavyweight champion Jon Jones did just that this week.

In separate donations, the PFL donated 25,000 meals to the Food Bank For New York City, while Jon Jones made a whopping donation in New Mexico. 100,000 meals will now be distributed to those in need there.

The PFL also announced in a press release distributed Thursday that it would create a PSA to draw attention to the Food Bank for New York City, and to drive more donations from other sources.

That’s all part of the league’s “PFL Fights for Communities” platform. Another 25,000 meals is the goal, with donations able to be made via https://pfl.everydayhero.com/us/covid

“Our thoughts are with all those impacted by COVID-19, and the heroes out in the front lines attacking this pandemic. We want to do our part to show that the PFL family is in their corner and they aren’t alone in this fight,” said Peter Murray, CEO of the Professional Fighters League. “I am a lifelong New Yorker, our PFL headquarters are in Manhattan and we’ve received tremendous support at our championship events hosted at Madison Square Garden. This is our home, and together, we can make a difference, provide some comfort, and make sure New Yorkers don’t go hungry.”

In a separate donation, UFC star Jon Jones donated the equivalent of 100,000 meals to New Mexico families in need, via The Food Depot. That food bank tweeted its thanks to the light heavyweight champion Thursday.

“We are so grateful for the support of New Mexico’s own UFC champion Jon Jones,” The Food Depot wrote in a tweet announcing the donation.

We are so grateful for the support of New Mexico's own @ufc champion Jon Jones. @JonnyBones made a donation today that will provide 100,000 meals for families in northern New Mexico! #COVID19Response #FeedNNM #ManyThanks #NewMexicoTrue pic.twitter.com/yXV3H8DsUM

Jones, who last competed in February, was recently arrested for firearms charges and a DWI. However, the troubled champion accepted a plea deal that saw the bulk of the offenses dropped, with only the DWI sticking. 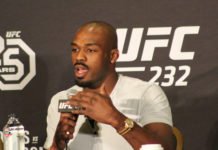