During this MMA hiatus, we’ve taken to scouting the world and selecting five favorite prospects from each country, for the most part. Sorry if we’ve missed any, but there’s still lots more to come. In this edition, we take a look at some of the top fighting prospects coming out of South Korea.

South Korea is known for its outpouring of exciting talent. Some of the bigger names that have emerged from the nation are Dong Hyun Kim, Chan Sung Jung, Doo Ho Choi, Hyun Gyu Lim, Kyung Ho Kang, and Seo Hee Ham.

Han Seul Kim is at the peak of his career, as he is currently on a six-fight win streak with wins over former UFC fighter Takenori Sato and current UFC fighter Frank Camacho. Kim actually finished Camacho in the first round which is very tough to do. Kim is an excellent striker that will stand and trade with anyone. The South Korean fighter is first and foremost a striker and a good one at that. He has stopping power in his hands with a few TKO wins and a few with just one punch. The long straight punches are what really shines when watching Kim; he uses his length well at 6’1″ — throwing jabs and one-twos and setting up the bigger strikes. He also has some solid takedown defense and his only weakness would be that he is a bit chinny.

South Korea has tons of talent and Jung Young Lee is one of my favorites. Not only is he fun to watch but he is super talented. Lee isn’t just a power striker, he is a very technical fighter as well. Out of an orthodox stance, he fires a snapping left jab. Many times following the jab he will throw a right-hand — firing that one-two down the middle. Kickboxing is an important weapon in the arsenal of Lee. The Korean will start a combo with a leg kick and at times end a combo with a leg kick. He doesn’t wrestle at all as he’s no doubt a striker only.

Lee made the cut as our Prospect of the Month for April. Check that article out for a more detailed breakdown of Lee’s skills.

In the last four years, Kyung Pyo Kim has only lost one fight. That loss was to now current UFC fighter Arman Tsarukyan. Now Kim is on a three-fight win streak, winning the Heat lightweight title is his last outing. His sole game plan is to get the fight to the mat and to do so he cuts off the cage well and executes some good wrestling. In the grappling department he is tactical using submissions to move to dominant positions. Kim is a good submission threat and has fight-ending ground and pound.

Min Woo Kim is the current Road FC bantamweight champion, just winning the title last November. He is one of the most well-rounded fighters on this list finishing fights on the mat and on the feet. On the feet, Kim is super technical throwing a textbook jab. Outside of that, he’s throwing tight combinations while mixing in kicks. Kim is even stronger on the mat as he’s a BJJ blackbelt. Though he has just a few submissions on his record, he is skilled at transitions, ground and pound, and his Fight IQ is where it needs to be. On top of it all he has a good size gas tank going the distance five times.

Chang Min Yoon trains out of Team Stun Gun under the main man himself, former UFC fighter Dong Hyun Kim. After fighting the majority of his amateur career in Road FC his entire pro career has been in the ONE Championship ring. Yoon doesn’t throw with a lot of output but throws a good jab, a one-two, and hits hard. On the feet, his best weapon is his heavy leg kicks. Yoon is a much better fighter once he gets the fight on the mat. He possesses some tactical grappling, transitioning effortlessly. Yoon is a submission threat as well with three submissions in his pro career. 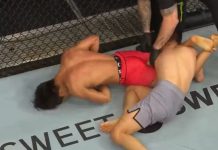