The Road to UFC tournament continued on Friday in Singapore, and it was a nasty night for mangled arms.

Road to UFC 3 produced a pair of highlight reel submissions, with an Americana and Arm-Bar stealing the show. In both cases, the victims were left nursing wounded limbs while victors celebrated moving on in the tournament.

Early on the card, undefeated Japanese banatamweight prospect Rinya Nakamura had Gugun Gusman trapped, and was landing some nasty elbows. But after being warned for hitting the back of the head, Nakamura had a point taken by the ref.

It didn’t matter in the end. On the restart, Nakamura, a decorated freestyle wrestler who won gold at the Under 23 World Championships in 2017, quickly got the fight down. He clamped on with a keylock (Americana), wrenching on Gusman’s limb and forcing the tap.

Painful is pretty much the best way to describe it. Nakamura moved to 5-0 with the win.

Not to be outdone, South Korea’s Jeong Yeong Lee took little more than 30 seconds to get the job done in the Road to UFC 3 main event. Lee took the fight to the ground early, and went belly down on an arm-bar attempt, forcing the tap from Dana White’s Contender Series and ONE Championship veteran Xie Bin. Bin could be seen grasping his arm in obvious discomfort immediately after the submission.

The featherweight known as “The Korean Tiger,” meanwhile, now moves on in the tournament, along with Nakamura. Lee moved to 8-1 with the victory.

That was a quick one!😳

🇰🇷Jung Young Lee takes the arm and gets the tap to march forward in the FW bracket! #RoadToUFC pic.twitter.com/z558oac338 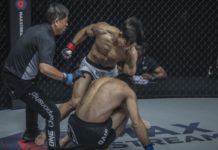