The Road to UFC tournament resumed this weekend in conjunction with UFC 280 in Abu Dhabi, featuring fighters from four weight classes competing for UFC contracts. In addition, a featured fight was positioned on each card, with a total of five fights per event. On Sunday, October 23, 2022, Road to UFC 6 (immediately following Road to UFC 5) went down, with the second batch of semifinal action in the flyweight, bantamweight, featherweight, and lightweight divisions.

Among the semifinal contests, Japan’s Rinya Nakamura, a wrestling sensation, looked to make a statement against Shohei Nose.

In addition, a featured welterweight fight was scheduled for Road to UFC 6. That fight saw Han Seul Kim of South Korea take on Gian Siqueira.

Road to UFC 6 takes place Sunday, October 23, 2022 at the Etihad Arena in Abu Dhabi, UAE. The event streams live on UFC Fight Pass, getting underway at 9AM ET. Full results can be found below. 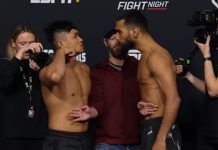