Since the dust from UFC 248 has settled and with the pandemic going on right now in the world, it gives us a great deal of time to think about how awesome this sport of MMA really is. Especially when you hear those amazing words from UFC announcer Bruce Buffer, “WE ARE LIVE!”

Once those magical words echo throughout the arena, we know we are in for a great night of fights, and since 1996 in this ever-evolving sport it is the one thing that has been constant – Bruce Buffer’s voice.

From his Buffer 180 spin to the Buffer 360 spin he executed at UFC 100, Bruce always seems to capture the moment and make those special fights even more meaningful.

I’m not sure when or even why the thought crossed my mind of who could be next to replace the great Bruce Buffer, but it may have been when I first saw Lilian Garcia make her PFL debut on May 9, 2019. Like many MMA fans I was really impressed with how well she did, coming from such a different atmosphere like the WWE.

Once you start the “what if” game, you dive deep down the rabbit hole and start to wonder how much longer we will have with Bruce Buffer inside the UFC Octagon.

One dream fight that comes to mind that needs to be introduced by the veteran voice of the Octagon, is seemingly the single most cursed fight of all time – Nurmagomedov vs. Ferguson. This fight needs to have “KHABIB ‘THE EAGLE’ NURMAGOMEDOV” and “TONY ‘EL CUCUY’ FERGUSON” belted out from the passionate voice of Bruce Buffer.

Lilian Garcia: Lilian has been doing amazing work with the PFL and you’d think the transition would be a little shaky as she had taken some time off after retiring from the WWE, but it was the complete opposite — she rocked her debut announcing gig with the PFL and showed the world how much of a pro she is on the mic.

Joe Martinez: He’s already has experience in the Octagon and has been getting the microphone placed in his hand to help out Buffer with the heavy workload due to the amount of fight cards that span the entire world. That is a huge honour and that could make him the front runner for the legendary spot.

Mauro Ranallo: Mauro’s voice is legendary within the combat sports world and I could see him bringing something unique when introducing fighters – but on the other hand, that would mean he would have to leave the play-by-play table and could we really part from his classic “Mamma mia!”?

Now, we always seem to discuss prospects when it comes to fighters, but I personally feel we might have to look elsewhere on the topic of who could replace Bruce Buffer. There are so many talented ring announcers in the fight business that need to be recognized. For me, one comes to mind is Jeff Way, who has been calling the amazing fights from promotions like Ruff MMA and the American Fight League.

Way always dresses to impress come fight night with his stylish suits, and follows it up with the passion and love he has for the sport that shows every time he announces. If given the opportunity, I could see him standing under the bright lights of the UFC in the future.

Father time always seems to catch up to every professional out there, but for now there hasn’t been much talk of retirement so we are safe from losing the voice of the UFC for another day. For now, I look forward to the amazing main events that get more extraordinary with hearing the classic, “IT’S TIME!”.

What are some of your favourite fights that Bruce Buffer has introduced that gave you goosebumps, or who do you think could replace the legendary Bruce Buffer? Let us know in the comments. 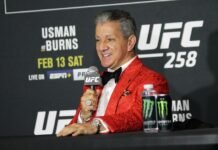 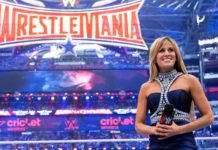