During this MMA hiatus, we’ve taken to scouting world and selecting five favorite prospects from each country for the most part. This time out we examine Italy, which is sadly one of the hardest-hit by the ongoing coronavirus pandemic. Yet in better times the country had been growing talent, and has many young up-and-comers working their way up through the ranks. Notable Italian fighters currently are Marvin Vettori, Mara Romero Borella, Alessio Di Chirico, and of course, Alessio Sakara.

Francesco Nuzzi is an unknown prospect from Italy and is one of the country’s brightest up-and-comers. After his first five fights (as a pro and amateur) he was only 2-3. Now Nuzzi has won his last seven fights winning a regional title along the way. He really needs a step up in competition to prove his worth to the big stage. Nuzzi would benefit from maybe fighting three more times before getting the UFC call-up at year’s end (given the current situation, even one more fight would be nice). From a technical standpoint, his stance kind of resembles Stephen Thompson’s, keeping his opponent guessing what his next move will be and counter-striking with precision. Unlike “Wonderboy,” though, he’s not afraid to move forward, looking for an opening to put somebody to sleep. “The Berserker” is constantly improving on his wrestling while on the ground he’s getting close to being a polished product.

There isn’t a lot of fight footage out there on Federico Pasquali but on what’s available I’ve been personally impressed. He has a really good jab and a right he throws behind it. He does get hit a lot but has proved to have a good chin. Outside of being a dangerous striker he does have fair wrestling and knows what he’s doing on the mat. It seems as though he does need to work on his cardio, which is perhaps his biggest flaw. Still green but a lot of talent.

Lucrezia Ria fought last Summer on Dana White’s Contender Series and beat a good fighter in Marilia Santos. While she won that bout, she didn’t come out with the UFC contract. That said, Ria proved to have some potential. Ria is a long fighter who uses her reach well. She throws a lot of output in bursts and hits really hard. Although she is exceptionally good on the feet she is even better on the mat. All her finishes are by submission and is dangerous on top or off her back. Maybe another look on the Contender Series?

Davide Baneschi has a lot of experience with 26 total fights, but he is still a prospect as he’s never had a chance on a bigger stage. In his latest fight, Baneschi won the Venator FC title which is a big deal in Italy. He doesn’t have much to offer on the feet outside of some good leg kicks he throws. He’s a grinder up against the cage, where he will work in some tough takedowns. Baneschi is known for his grappling holding twelve submissions. He’s dangerous on top or off his back as his submission attack is by far where he’s the most dangerous.

Federico Mini is about at the point of shaking that prospect label as he’s knocking on the door of 32-years-old later this year. He’s still young in fight years only fighting eight times as a pro. Mini really impressed me in his last fight stopping Emrah Sonmez, someone I really liked, and winning the Venator FC title in the process. That fight was nearly two years ago so that is an unfortunate layoff. He has decent wrestling and does have two submissions but I think on the feet he’s much more dangerous. Mini has a lot of power mainly from a monster right hand he throws. Also highlighted on the feet is some heavy leg kicks and solid counter striking. 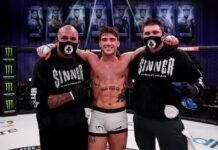