Las Vegas, NV — The “Voice of the Octagon” was honored for 25 years on the mic this past weekend. A tribute that Bruce Buffer himself wasn’t expecting.

“This is a huge honor for me,” Buffer said backstage at UFC 258, at the UFC Apex in Las Vegas. The man behind “It’s time!” was there all the way back at UFC 8, the promotion’s only show in Puerto Rico. That was 1996. Months later, in July, he worked his first full show as part of UFC 10 — the same night Mark Coleman made his promotional debut.

Buffer has been part of the UFC family ever since. His snazzy suits, inimitable voice, and trademark catchphrase are as much a part of UFC cards as the fights themselves.

“My passion just keeps getting stronger. I wish I had another 25 years, who knows. Because I’m ready to rock for another 25 more,” Buffer exclaimed. “I can’t even imagine 25, its just gone by so fast. If there’s ever an example of time flying, this is it.”

Buffer was extremely thankful to the UFC for Saturday night’s tribute. “That really caught me like a side shot to the head. Just so beautiful. Thank you. Thank you, my beloved UFC. Thank you.”

From the start, he was a loyal soldier, said Buffer. “I wanted to do everything I could beyond being the voice of the octagon and the octagon announcer for the UFC, because I love the organization. I love the sport. I love the honor of announcing these female and male octagon warriors, the greatest fighters in the world, some of the greatest people I’ve met,” he stated. “The friendships I’ve made, the relationships with the media, with fighters, with the people I work with, this is like boy scouts go to camp every weekend. Let’s face it, I love this. This is awesome.”

So what’s left for Bruce Buffer? He’s not planning on retiring any time soon. And he’s up for just about anything, always interested in new challenges. “Let me parachute out of a plane, and parachute into a stadium and yell ‘It’s time!’ as I land. I’ll do it. You ask me to, I’m there. I’m always game for something.”

We’re not sure if he’s joking. But for now, expect to see Bruce Buffer doing his thing inside the octagon for a long time to come. 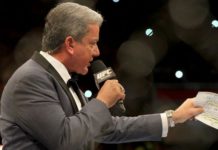