While the status of UFC London is up in the air — we don’t know the where, when, or even who when it comes to the show — one of its fights, at least, will go down this week. Only, under another promotion’s banner.

The Fight Night card expected for the O2 Arena on March 21 has been forced to relocate due to restrictions brought about by the rapidly spreading coronavirus. Cage Warriors 113, however, is moving ahead this Friday, behind closed doors with essential personnel only.

The card will also play host to the John Phillips vs. Dusko Todorovic middleweight fight which had been booked for UFC London. Promoter Graham Boylan, who had previously indicated a desire to salvage whatever fights could be saved from the London card, confirmed the news on social media early Monday.

“Update: [Cage Warriors 113] WILL be bhind closed doors. The ticketing team & office people will be working on how refunds can be claimed, that info will follow,” he wrote on Twitter. “UFC Bout 1: John Phillips vs. Dusko Todorovic has been confirmed to take place at [Cage Warriors 113] Friday night.”

Cage Warriors airs on UFC Fight Pass and has helped bring a number of fighters to the UFC in years gone by.

UFC London was to be Todorovic’s octagon debut. He won his way into the promotion on Dana White’s Contender Series last year, and boasts an undefeated 9-0 record. Phillips (22-9) lost his first three UFC outings before finally getting his hand raised after knocking out Alen Amedovski last September. Phillips previously fought for Cage Warriors.

Cage Warriors 113 kicks off Friday at 1PM ET, at the Indigo at The O2 in London, England.

Update: 1. @cagewarriors #cw113 WILL be behind closed doors. The ticketing team & office people will be working out how refunds can be claimed that info will follow.

Update: 2.
UFC bout 1: John Philips v Dusko Todorovic has been confirmed to take place @CageWarriors #cw113 Friday Night. The event will be broadcasted LIVE on @UFCFightPass as well as TV Networks around the World. 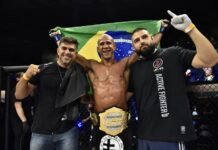 UFC: Gregory Rodrigues in Against Dusko Tudorovic on June 5