Bellator 241 is the latest sporting event to be closed off to fans.

After hosting a ceremonial weigh-in for the event Thursday, Bellator has opted to close Friday night’s Bellator 241 to the public. The show will also be closed to media members, many of whom were already in town for the event.

In a statement released Thursday, Bellator’s PR team wrote that “The health and safety of our athletes, fans and staff are our number one priority and we will continue to monitor all information surrounding the COVID-19 outbreak. Out of an abundance of caution for all parties, Bellator 241 on Friday, March 13 at Mohegan Sun Arena will be closed to the public. Refunds for ticketholders will be available at the original point of purchase.”

Scott Coker also tweeted the news earlier in the day.

Out of an abundance of caution for all parties, #Bellator241 on Friday, March 13 at Mohegan Sun Arena will be closed to the public. Refunds for ticketholders will be available at their original point of purchase.

The deveopment comes in the wake of multiple states banning large gatherings, including Connecticut. However, as the Mohegan Sun is on native land, the current state ban on mass gatherings does not apply.

That having been said, the promotion is erring on the side of caution.

The move follows word of the NHL and NBA suspending their seasons. Major League Baseball has pushed the start of their own season back. This weekend’s UFC card in Brasilia, Brazil is also expected to take place inside an empty arena. 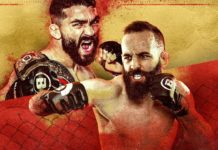