Las Vegas, NV — While UFC 248 played out over the weekend, Sweden’s Ilir Latifi took some time to look back at his UFC 247 fight against Derrick Lewis. At a Dominance MMA media event in Las Vegas, we caught up with Latifi, and discussed the storyline that has been snowballing ever since the Texas card last month: judging in MMA, and what to do about it.

For those who missed it, Latifi made his UFC heavyweight debut at the Houston card. He took on one of the most imposing figures in the division in Lewis. And while Latifi’s wrestling seemed to give him the edge, the judges awarded ‘The Black Beast’ a unanimous decision victory, at home.

That leaves Latifi feeling a certain way about Texas, without question. “You don’t want to fight there if you know that that can happen to you,” Latifi explained. “Because people can say ‘but you have the next fight.’ But it’s not about having the next fight. It’s about people’s careers. It’s about people’s payment too. Fighters get paid, when they lose, the payment is not the same. You’re playing around with people’s career, and it’s your hobby, judging that fight. If you’re going to judge, you should have knowledge about the sport.”

That’s been a common refrain. The Texas Department of Licensing and Regulation came under fire for its use of boxing judges (not that this is the first time that’s happened), not to mention questions of impartiality (see: Krause, James). All sorts of suggestions have been floated in the wake of the controversial event, which saw Latifi, Krause, and Dominick Reyes arguably robbed of victories. Including open scoring, which was trialed this past weekend under the Kansas commission at Invicta Phoenix Series 3.

Latifi had his own suggestion for cleaning up judging. “It should be judges that are ex-fighters, or trainers, or people that really understand the sport,” he said. “Not boxing judges that don’t have an understanding of the sport. Because this is not boxing. This is MMA. This is not boxing, it’s not wrestling, it’s not another sport, it’s MMA. To understand MMA fighting, you have to have some experience in there.”

While Jon Jones vs. Dominick Reyes stole headlines, Latifi’s fight against Lewis is certainly another argument made that judging in MMA is broken. “Everybody that [has] seen that fight knows that I won it,” exclaimed Latifi when asked about the bout. “There’s nothing more to say. I think I won the fight pretty clearly. Coming up to the heavyweight division, a lot of people doubted me, taking on a top five contender, one of the biggest guys in the division.”

“I think I surprised a lot of people,” he added. “Derrick too.”

Having taken some of the heaviest shots Lewis had to offer, Latifi says heavyweight feels right for him. “I felt good. Not cutting weight, I felt power. I felt [I had] better conditioning and everything.” He’s not, however closing the door on light heavyweight. “I’m open for challenges,” he stated. “I see this as a new challenge, heavyweight. I always saw myself fighting in heavyweight sometime in the future. That’s my natural base. I’m thick boned, I’m heavy. I’ve just got to put on some good weight for the division, and I’m going to be here for a long while.”

Watch our full interview with Ilir Latifi from the Dominance MMA media day above!

After Misfire in Columbus, Aleksei Oleinik vs. Ilir Latifi Moved to UFC 273 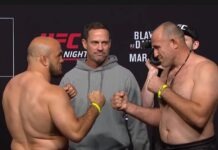 With Romanov Fight Off, Ilir Latifi Gets Aleksei Oleinik at UFC Columbus