On a night full of entertaining fights and impressive performances, one bout stood above the rest. At UFC 248, there was zero question as to who would take home Fight of the Night. If you missed it, go watch it: Weili Zhang vs. Joanna Jedrzejczyk was an instant classic.

It’s also an early candidate for Fight of the Year. The strawweight title fight stole the show.

Zhang had power, Jedrzejczyk had volume, and both women wanted the belt. What transpired was a back-and-forth affair that many were immediately calling the greatest women’s fight of all time. And it certainly has its place on the list of best fights of all time, period.

For those who believe that to be hyperbole, go watch it again.

In the end, after five hard-fought rounds that left Zhang bloodied and Jedrzejczyk appearing like she was wearing elephant man prosthetics, the Chinese champion walked away with the split decision victory. Had the fight gone the other way, no one would have felt cheated. And while there are other deserving contenders in the division (the winner of Rose Namajunas and Jessica Andrade at UFC 249 has a case for the next title shot), few would complain if the UFC got around to booking a second fight between Zhang and Jedrzejczyk.

Performance of the Night bonuses at UFC 248, meanwhile, went to Beneil Dariush and Sean O’Malley. Dariush and Drakkar Klose were in the running for Fight of the Night before the strawweights came along. But Dariush, at least, walks away with $50,000 for his second-round KO of Klose in a fight where both men had chances to finish.

O’Malley, meanwhile, returned from a two-year absence to finish off Jose Quinonez in short order. While there were some other deserving performances on the night (Danaa Batgerel and Gerald Meerschaert come to mind), O’Malley’s quick finish after a long layoff certainly deserved notice. 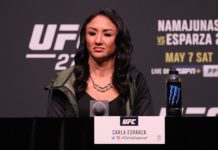