Strike while the iron is hot. That seems to be the thinking behind the next women’s featherweight title fight in the UFC. Per a new report, Felicia Spencer is reportedly set to challenge Amanda Nunes at UFC 250.

ESPN’s Brett Okamoto reported the development, citing UFC President Dana White. Spencer and fellow featherweight standout Megan Anderson were in action last weekend at UFC Norfolk, with both women scoring first round finishes. Given Spencer holds a win over Anderson from last year at UFC Rochester, it was expected that she had an edge in terms of a title shot.

Nunes (19-4) was a keen observer of UFC Norfolk and its pair of women’s featherweight contests. After the fight, she was high on the performance of both Anderson and Spencer.

I like both winners tonight. Now it’s up to the @danawhite I’m ready for either. 🦁

Nunes is currently on a ten-fight win streak, having picked up victories over some of the biggest names in the sport. Those include Ronda Rousey, Miesha Tate, Holly Holm, Germaine de Randamie, and Cris Cyborg. Nunes won the 145lb title, adding it to her bantamweight belt, from Cyborg in December 2018. The belt has not been defended since, but ‘The Lioness’ has been adamant that she planned on defending it soon.

Spencer (8-1) was born in Montreal, but fights out of Florida. The 29-year old captured gold in Invicta FC prior to jumping to the UFC last year. She holds wins over Anderson and Zarah Fairn, via submission and TKO, respectively. Sandwiched between those two victories was a loss to Cyborg at UFC 240 in Edmonton. However, going the distance with Cyborg (one of only two women to do so in the past decade) earned her a number of new fans.

UFC 250 is set to take place in Sao Paulo, Brazil on May 9, 2020. The card is expected to be headlined by a bantamweight title fight between Henry Cejudo and Jose Aldo. 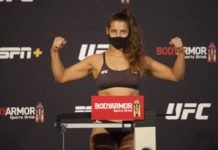