Featherweight action at UFC Norfolk welcomed a pair of debuting fighters to the octagon. Both Aalon Cruz and Spike Carlyle were under the bright lights of the UFC for the first time. Only, under very different circumstances. Cruz was making his debut after coming into the promotion through Dana White’s Contender Series. He had been expected to face Steven Peterson, but ‘Ocho’ was forced to drop out of the fight.

As a result, in came ‘The Alpha Ginger’ Spike Carlyle. Carlyle, known as an entertaining personality and fighter, was already cutting to 145lbs for a Muay Thai bout. Good thing, as he didn’t have much time to prep for this one.

The enthusiastic Carlyle took the center of the cage from the bell in his karate stance. He was blitzing in on the taller Cruz. Carlyle landed a head kick that stunned Cruz forcing him to drop level for a takedown. Carlyle Landed an elbow in the clinch and fell into the mount. Carlyle landed ground and pound including double hammer fists until the ref stepped in. A huge debut win for the entertaining UFC newcomer, and on short notice.

ALPHA GINGER! What a debut for Spike Carlyle! #UFCNorfolk pic.twitter.com/hbWeR7z3PC 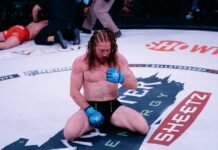