The former “World’s Strongest Man” will return to the cage next month. Quentin “Ruskov” Domingos will face Mariusz Pudzianowski at KSW 53 in Lodz, Poland, the promotion has announced on Facebook.

Pudzianowski (13-7, 1NC), a former strongman and World’s Strongest Man winner, has long been one of the promotion’s biggest stars. While he’s faltered in steps up against competition (Peter Graham and Karol Bedorf come to mind), “Pudz” has been generally reliable against lesser names, finishing eight of his opponents by KO/TKO.

Quentin Domingos (5-1) will be making his promotional debut in the fight. Born in Portugal and fighting out of France, “Ruskov” is coming off a win in December. It’s worth noting, however, that he’s never faced an opponent with a winning record to date in his career, making Pudzianowski a big step up in competition. 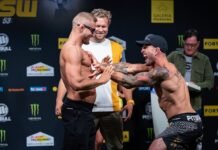 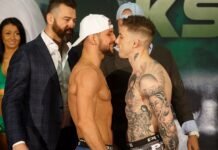