Brok Weaver earned his first win inside the octagon at UFC Rio Rancho, but it certainly didn’t come the way he wanted.

Dana White’s Contender Series winner Brok Weaver made his octagon debut at UFC Rio Rancho on Saturday. One of three Contender Series fighters making their debut on the card, Weaver was the only one who had actually won his bout (the others, Shanna Young and Daniel Rodriguez, had been brought in as short-notice replacements).

Welcoming Weaver to the promotion was fellow lightweight Kazula Vargas, who had dropped his own debut last year.

Vargas came out on the attack to open the affair. He connected with a leg kick, but Weaver soon settled down and began moving forward. He had a kick caught, however, and was backed up against the fence, eating some strikes before fighting off a takedown. Vargas would stay on it, putting Weaver on his back. Weaver worked back to the cage, putting his back to it. He tried to wall-walk up, but Vargas had a leg trapped. Weaver, however, then opted to work for a guillotine, and seemed to have it in tight. Vargas looked trapped for a moment, before pulling his head free.

Then, the unthinkable. Vargas connected with an illegal knee on the downed Weaver. The ref immediately ruled it a disqualification, as Brok Weaver was seated when he full-on ate a knee to the head. Vargas had jumped in with some ground strikes before the ref could make the save.

A bittersweet finish — Brok Weaver earned his first UFC win, but certainly not the way he had envisioned. 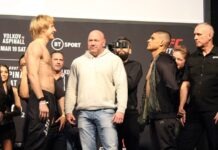