Tom Aspinall submitted Alexander Volkov in the first round in the main event of UFC London this past weekend. Arnold Allen also had an impressive night at UFC London when he knocked out Dan Hooker in the co-main event. Today we will be looking into what is next for the losers of the promotion’s wildly popular return to the United Kingdom.

Volkov is now 2-2 in his last four with his two losses being rising stars in the UFC heavyweight division. His two most recent wins came against Marcin Tybura and Alistair Overeem. For his next fight, he should be looking to fight someone on a winning streak to boost his resume.

Sergey Spivak is 4-1 in his last for and is coming off a big TKO win over Greg Hardy earlier in March. Spivak is 14-3 and he has been fighting professionally since 2004. Spivak is on his way up in the rankings but will likely still be ranked behind Volkov in the top 15, meaning both men would benefit from a win in this heavyweight clash.

Dan Hooker is now 1-4 in his last five fights following a TKO loss to Allen this past weekend. It’s not a good look, but Dana White went on record to say Hooker can do “whatever he wants” following the loss. He’ll presumably be getting another fight or two regardless of outcome.

Assuming he sticks to featherweight, Hooker has options. There’s a rematch with Edson Barboza, for example— the pair first met at lightweight. Ilia Topuria, who also won on Saturday, would be interesting as well, though with his win streak, he might be looking for something bigger.

Rodrigo “Kazula” Vargas is 1-3 in his UFC career with one of those losses being by disqualification. He is still very new to the company but going 1-3 in your first four is a recipe for disaster. Whether or not his services are retained is a big question mark right now. If they are, a newcomer makes sense.

Vargas’s next fight: promotional newcomer or fighting outside the UFC

Takashi Sato is coming off a decision loss to Gunnar Nelson this past weekend at UFC London. That loss makes him 2-3 in his UFC career but the difference between Sato and Vargas is that Sato has knocked out his opponent in both of his UFC wins. Sato has 11 wins by knockout and is always down to bring the fight to his opponent. Although he is on a two-fight losing streak, it is likely he gets another shot to fight an up-and-coming fighter in the UFC’s welterweight division.

Jack Dalla Maddalena is a welterweight that is 1-0 in the UFC and has knocked out his opponent in nine of his ten wins. Both of his career losses were finishes meaning he has never had a fight go the distance. This style would match up perfectly with the unorthodox striking of Takashi Sato.

Luana Carolina was a victim of one of the most impressive knockouts in women’s MMA history this past weekend. Molly McCann landed a beautiful spinning back elbow in the third round that put Carolina’s lights out. This loss makes Carolina 3-2 in the UFC. Her only two losses were against dominant grapplers in McCann and Ariane Lipski.

Mariya Agapova is 2-2 in the UFC with all four of those fights being finished before the final bell. She is coming off a submission loss to Maryna Moroz but should be looking for a big fight to get back in the win column. Both women need a win and should look to each other for a possible fight of the night in their next bouts.

Jai Herbert was knocked out in the second round of his bout this weekend against UFC’s rising star, Ilia Topuria. This loss makes him 1-3 in the UFC with none of those fights making it to a decision. Although he has come out on the short end of the stick three times he will likely get another shot due to his willingness to put on great fights. He has nine of his 11 professional wins by knockout and has been knocked out in three of his four losses.

Ludovit Klein is 2-2 in the UFC and is coming off a split decision win over Devonte Smith earlier in March. Klien has finished 16 of his 18 professional wins with eight by knockout and eight by submission. Klein has a pretty big name in the UFC although he only has four fights with the company. With that being said if there is anyone that will boost the popularity of Herbert, it is Klein. 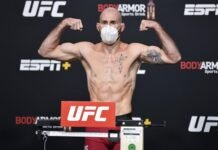