UFC Featherweight standout Steven ‘Ocho’ Peterson joined us recently to discuss why he needed to withdraw from his scheduled fight with Aalon Cruz later this month at UFC Norfolk.

The Fortis MMA fighter wanted to wait until after UFC 247 was completed before making a public announcement, because he had three teammates competing on that card and he did not want to take any attention away from his friends. Ultimately, all three Fortis MMA fighters lost on the evening and that did not boost the spirit of the UFC Featherweight. “It seems to be kind of a rough start to the year all things considered just in my life, it is just one of those things that you need to take it for what it is and you got it let it burn for a little bit and use it for motivation moving forward.”

As far as his injury and his need for the withdrawal from fighting Cruz, Peterson explained that he has a bone chip lodged in his elbow and it has been bothering him for a while now. “It’s been an issue, blocking punches is very strenuous on your joints, kicks are even worse and I don’t even know when it actually happened but I know its been getting a lot worse lately and ya know I would lose use of my arm and it would just go numb and then for days it would be locked up.” ‘Ocho’ went on to explain how he has learned to just deal with it but since he hurt himself early in camp, the decision to withdraw was the right one. “This time it happened in the first sparring in my camp. I went out there to do rounds and my elbow locked up.” Peterson will undergo minor surgery this Friday and he anticipates on being back to training soon.

We also discussed the outcome of UFC 247 event and the tough night his gym had going 0-3 on the evening. “All of them surprised me, I thought we were going 3-0. It was like a bad dream, once it’s done you can’t go back. All you can do is look at how you ended up there and look at getting better in those areas.”

As far as who ‘Ocho’ wants to fight in his return, Peterson called out Cub Swanson and Kron Gracie. “I feel like I match up really well against Cub, I’ve been watching him since I was a little kid and ya know the young lion needs to feed on the old lion in this sport, so step up.” Peterson was equally as confident in a potential match-up against Kron Gracie.

“I definitely hold a significant advantage on the feet, he would want to take me down from the get go, but uh, I have never been submitted and I won’t get submitted. You would have to put me unconscious, you would have to mangle me, I am not gonna tap in there.”

Look for the Fortis MMA standout Steven Peterson to return to the Octagon around June or July.

Check out our full chat with ‘Ocho’ below! 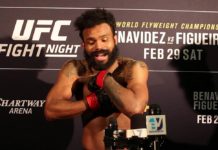 Carlos Condit Admits “UFC’s Probably Going To Get Sick of Me Not Showing Up”...