James Krause gave it his all at UFC 247 on one day’s notice, but Trevin Giles was too much for Krause, taking a split decision.

In one of the wildest short-notice replacement situations since Anderson Silva at UFC 200, James Krause stepped in to fight Trevin Giles on just twenty-four hours notice at UFC 247 in Houston on Saturday night. Win or lose, Krause — a lightweight turned welterweight competing at middleweight against Giles — was going to see his stock rise, just for saving the day. Giles, fighting at home in Texas, meanwhile, was no doubt happy just to remain on the card.

These sorts of bouts are almost critic-proof. Is one fighter that good? Well, the other took it last minute. Was it over quick, or did it drag? Either way, how much can you fault either man.

Giles was landing early hooks on James Krause who was backing up. After a clinch exchange, Krause ended up on the back of Giles. Several times, it looked like Krause had it under the chin, but Giles ended up spinning out and crushing Krause with an elbow after standing back up to close out the round.

Giles started out the second round strong, knocking Krause around with hooks. Giles was pushing the pack and got Krause down. Krause attempted to counter with an armbar, but Giles broke out of it and began landing ground-and-pound. Krause turned away from it, exposing his back, and Giles locked up a rear-naked choke, but ran out of time.

Krause came out firing in the final round. He racked up several leg kicks and landed a slick straight right after Giles let out a “woo.” Both men were exhausted in the final round, with Krause’s issues being amplified by him taking the fight on a day’s notice. Giles landed a heavy combination and drove in for a takedown, but Krause held him up until the end of the round. 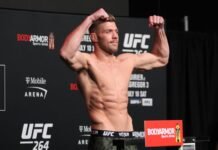 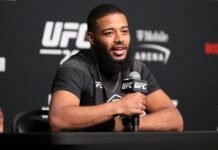 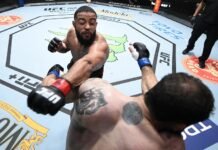