SBG Ireland star James Gallagher has been forced out of his Bellator Dublin fight. The Irish bantamweight had been expected to headline the event opposite Cal Ellenor, a re-booking of a planned pairing from last year. That’s a fight Ellenor himself was forced out of at the time due to a medical condition.

Now, it’s Gallagher withdrawing from the bout due to an undisclosed injury. With the show just a few weeks away, Leah McCourt vs. Judith Ruis has been promoted to the main event.

MMA Junkie was first to report the news Tuesday.

McCourt issued a statement on Instagram shortly after the news broke.

“Last night I was given the news, that I will be main event at Bellator Dublin,” the featherweight fighter wrote. “It’s hard to believe that a single mum from a council estate in Belfast will be main event in a sold out 3arena in Dublin live on Channel5 TV. I have clawed my way up from the bottom, life has thrown everything at me, but my determination has never wavered, this moment is a testament to my faith, work ethic, my team, my family and never giving up. To be the first Irish female to ever headline a major MMA promotions card and the first female to headline a Bellator Europe card is surreal and emotional. I’m ready to rise to the occasion. Trust me, this will be a main event performance. Ready to make history.”

After an extensive and successful amateur run that spanned several years, McCourt turned professional in 2017, competing for Cage Warriors before signing on with Bellator MMA last year. She went 2-0 in 2019, with both wins coming via stoppage. Now 3-1 as a pro, McCourt is a prospect to watch out for at 145lbs, a division that was shaken up by the arrival of Cris Cyborg to the promotion last month.

Ruis (6-4), who has previously competed for Shooto and DEEP, will be making her promotional debut at Bellator Dublin. She enters the bout on a two-fight win streak, with victories over Irina Godynets and Cinja Kiefer, both via submission. 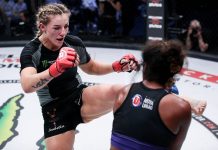 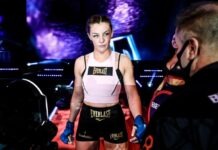 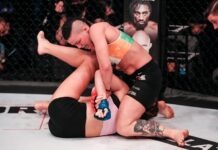