Narrative: Hill is another fighter making his UFC debut after earning a contract on DWCS last Summer. Hill was supposed to debut last August in Shenzhen but couldn’t fight due to VISA issues. Now he’s still fighting a tough fighter in Darko Stosic. Stosic coming into the UFC was a high-caliber prospect with a lot of hype behind him. Although he started off 1-0 in the UFC Stosic has lost his last two in very disappointing performances. Hill is looking to stay undefeated while Stosic is most likely fighting for his job here.

Shawn Bitter: Hill to me has all the talent to be a really good fighter in the future, as the only thing he needs to do is throw more. Stosic is known to not throw much either, but Hill really picks his shots to fight a long distance. This fight, I actually think that will work to Hill’s advantage. I predict Stosic to hunt for the finish early and possibly win round one. Stosic does slow as the fight goes and that’s where Hill takes over and wins a 29-28 decision.

Marcel Dorff: Jamahal Hill made a solid impression during the Contender Series last year. He was supposed to debut in Shenzhen but had to withdraw due to visa issues. Now he takes on the powerhouse Darko Stosic. Stosic had a lot of hype behind him. But that hype kinda disappeared after back to back losses against Devin Clark and Kennedy Nzechukwu. I expect Stosic to push the action early and hunt for that first-round stoppage. The longer the fight goes, the more I favor Hill. But I think Stosic will get the job done. Stosic via TKO (R1).

Ryan Fortune: I’m picking Hill here. Stosic has disappointed me in his last two fights against Devin Clark and Kennedy Nzechukwu. The pattern in both fights is one where Stosic has a decent first-round and fades as the fight goes on. He doesn’t throw a lot of volume and I prefer the striking at range from Hill. I feel like he has a volume edge which will get him the win in his UFC debut. If Hill gets out of the first round, similar to Landwehr vs. Burns, his  likelihood of winning increases in my eyes. Hill via decision.

Max Freedman: There’s a lot to be excited about with Hill as a talented, young light-heavyweight. On the flipside, Stosic’s UFC career has been underwhelming despite some razor-close decisions. This will be above and beyond the most experienced and talented fighter Hill has faced. Stosic gets back in the win column with a thumping first-round TKO.

Kristen King: In the fight between Jamahal Hill and Darko Stosic, I am picking the newcomer in Hill to get his first UFC win, but I do not believe it will be easy. Hill is phenomenal when it comes to landing often with his incredibly accurate and fast strikes. This high output Hill has will be beneficial against someone like Stosic, who is not particularly known for his output or accuracy. However, I am not entirely confident that this fight remains on the feet, so in the event that it reaches the ground, things can get very interesting. Stosic can find more success if he were able to control Hill and land some ground-and-pound, but Hill is no slouch off his back and will more than likely continue to angle for a better position. Overall, I believe Hill has a better chance at winning this fight, so my pick is for him to get it done via unanimous decision.

Anthony Walker: I’m leaning toward Hill remaining undefeated. Since dropping to LHW, Stosic hasn’t quite looked as sharp and seems slow. Granted he was facing particularly athletic opponents in his 205lb losses, but I think Hill’s speed advantage will give him the win. 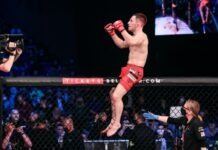