In a quick scrap on the UFC Busan card, Da Un Jung proved he’s a finisher, making it two-for-two in his UFC career so far.

South Korea’s Da Un Jung was looking to make it two in a row at UFC Busan on Saturday. Fighting at home, he was taking on Mike ‘Slow’ Rodriguez on the main card of the Fight Night event, airing on ESPN+ and UFC Fight Pass.

Jung’s first trip to the octagon had resulted in a third-round submission of Khadis Ibragimov at UFC Shenzhen. His second ended much quicker than that.

Jung fired a front kick as he and Roriguez circled, but it didn’t take long at all for him to do something more spectacular. Uncorking a fight-ending punch just over a minute into the fight, the South Korean sent Mike Rodriguez crashing to the canvas. It was a right hand that hit home, catching Rodriguez flush. The American was pretty much done at that point. Although Jung added a few more strikes to ensure Rodriguez truly was out before the ref made the save.

“I hope it’s like this every single time!” Jung said following the bout. 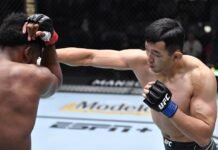