The final UFC event of the year goes down Saturday, with UFC Busan closing out the calendar in South Korea.

Frankie Edgar has been a UFC staple and favorite for a very long time. Edgar won the UFC belt at 155lbs against the legend BJ Penn way back in 2010. And somehow after all these years, Frankie’s name is still in the mix as one of the best fighters in the UFC.

At just 5’6″ and a 72″ reach it is arguable that Frankie should have begun his career at a much lighter weight in the first place. Many fans and even Frankie’s coaches seem to have had this idea of a lighter Edgar for quite some time now.

Frankie Edgar (@FrankieEdgar) explains that the sport is not about size but heart and balls and that is why he didn't drop down weight classes earlier in his career #UFCBusan pic.twitter.com/Fn5lcAlC6i

Frankie challenged for the featherweight belt multiple times during his stint in the 145lbs weight class. Though he was not successful in his pursuit of the featherweight strap, Edgar was able to cement himself as one of the guys to beat to get a title shot in the division.

Edgar is looking to move down to bantamweight after this fight as he was actually pulled off the January 25th UFC Raleigh card to fill in for an injured Brian Ortega. Apparently Edgar still hasn’t ruled out competing in that bout but, unsurprisingly, must evaluate how he emerges from his bout with Chan Sung Jung at UFC Busan.

It should be very interesting to see how Frankie handles this weight cut and fight at featherweight because it could very well be his last.

Amanda has had just one fight in the UFC thus far where she was finished by standing elbows back in 2017 by Leslie Smith. Before that, Amanda was a veteran of the Brazillian Jungle Fights promotion where she also fought at 135lbs. At just 5’4″ tall and only possessing a 65″ reach Lemos is a lot smaller than the majority of the women in the UFC’s women’s bantamweight division. So the fact that she is moving down to 115lbs for her next fight is not a huge surprise. Evening the playing field in terms of physical attributes might be a good idea, but only if Amanda can make the weight without compromising her body for the fight the next day. This will be Amanda’s professional MMA debut at 115lbs, even though she has not even had a fight at 125lbs, let alone at strawweight.  It will also be  Lemos’  first fight in two years so she will definitely be a fighter to watch on the scale and in the cage.

Ryan Benoit had his first fight in the UFC way back in 2013. Though his record may look like one of a journeyman, Ryan has been in a lot of ultra-competitive and exciting fights. Benoit stands at 5’5″ and possesses at 68.5″ reach.

The last time Ryan stepped on the scale to weigh in for a mixed martial arts fight was back in late 2017, where he missed weight and came in at 129lbs. Benoit went on to win that bout against Ashkan Mokhtarian via head kick finish in the third round. But, Ryan competed in a grappling bout back in February of this year at the weight class of 155lbs.  Benoit will definitely be a fighter to watch come weigh-in time due to a long lay off from the sport and past issue making 125lbs. However, he’s moving up a division here. 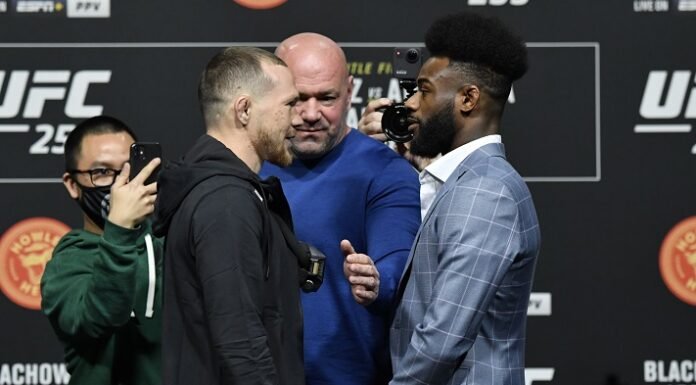