Liz Carmouche has landed on her feet, signing with Bellator MMA after being unceremoniously dumped by rival UFC.

After what can only be described as a questionable release by the UFC, Liz Carmouche has found a new home with Bellator MMA. The promotion’s CEO, Scott Coker, announced the news in a media scrum Friday ahead of Bellator 235, the first of back-to-back shows the outfit is putting on in Hawaii this weekend.

Carmouche (13-7), a former two-time title challenger in the UFC, at both bantamweight and flyweight, learned she had been cut from that promotion while carrying out promotional duties for UFC on ESPN 7 just under two weeks ago. The move, and the timing, were somewhat scandalous, given Carmouche had taken time away from her day job to promote the Washington card. That, coupled with the fact that she was coming off a title bid, raised a number of eyebrows.

Still, it seems she’s landed on her feet. Coker revealed Friday (via MMA Junkie) that Bellator had signed the Girl-rilla, and in doing so, suggested a flyweight tournament was in the works. Stating that they were continuing to build the division, he added “Don’t be surprised next year if that is our female tournament. A bit of breaking news we just signed Liz Carmouche today. I had a meeting with her yesterday. We sat down, made a deal and she signed it this morning and we’ll announce it on the broadcast today. But Liz is singed. She will now be fighting in Bellator. It’s going to be another great asset to our 125-pound weight class.”

Carmouche went the distance against Valentina Shevchenko at UFC Uruguay this past August, in a bid for flyweight gold. She entered that fight on a two-fight win streak, and was ranked fourth in the division at the time of her release. It wasn’t her first shot at gold, however. Carmouche was the first woman to step in the octagon back in 2013, to face Ronda Rousey at UFC 157. She lost the bout via arm-bar near the end of the opening round. 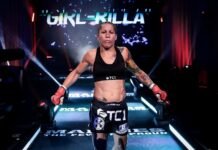 Bellator 246: Liz Carmouche Has a Suggestion for Fighters Who Miss Weight 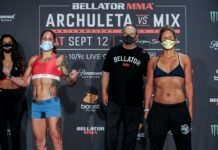 Dana White Reveals Take It or Leave It Offer for Conor McGregor vs. Dustin...