Yoel Romero once wrestled in Dagestan, and that has prompted Omari Akhmedov to call for a fight with the former middleweight title challenger.

Las Vegas, NV — Russia’s Omari Akhmedov picked up a solid win against American Ian Heinisch at UFC 245 on Saturday night. The powerful ‘Wolverine’ improved to 20-4-1 with the win, which saw him build up an early lead, and have to fend off a surging Heinisch late in the fight.

Speaking to reporters including Cageside Press following the bout, Akhmedov said he was “expecting a tough fight, because [Heinisch] was a tough opponent.” He got tired later in the bout, he added, “because I was looking for the finish, to be honest.”

One thing, however, did surprise Akhmedov. “I was surprised by his chin. He’s got a tough chin, granite chin if you want. So that’s what surprised me.”

Akhmedov, who has fought at welterweight in the past, seems big even for the middleweight divsion. He admitted Saturday that he struggled with the cut to 170, saying “I feel much better in this division. This is my division.”

With the victory Saturday, he improved his win streak to three, and undefeated streak to six, with only a majority draw against Marvin Vettori muddying the waters since 2016. Moving forward, said Akhmedov, he’s looking to face “Yoel Romero, because he’s a legend, he’s been in this sport for a while. I know back in the days, he used to wrestle in Dagestan, in my native republic. Now he’s got to fight with a Dagestani, not only wrestle. He’s got a chance to fight a Dagestani guy.”

As far as a time frame, Ahkmedov added, he’s looking to return sometime around May next year. Romero or not, expect the middleweight to get a solid step up in competition when he does. 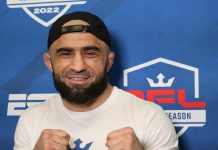