In a fight that devolved into a bloody brawl, Petr Yan stopped Urijah Faber in the third round with a highlight-reel head kick at UFC 245.

The second fight back for newly unretired Hall of Famer Urijah Faber had the Team Alpha Male founder paired up with a killer in the bantamweight division: Petr Yan. Their pairing opened the UFC 245 card at the T-Mobile Arena in Las Vegas on Saturday night.

Yan, on an eight-fight win streak, had yet to taste defeat inside the octagon. He’d knocked off some big names since arriving in the UFC in 2018, most recently John Dodson and Jimmie Rivera. Faber, meanwhile, a pioneer of the lower weight classes, finished Ricky Simon upon his return to action earlier this year.

Faber opened up with a kick, staying on the outside early. A frankly defeaning “U-S-A” chat greeted Yan, but he was able to force Faber back, walking him down. As Faber moved back to center, however, he flashed a dangerous knee. Both men fired off a few single strikes, with nothing landing clean. Yan would open a combination with a head kick, but connected. A front kick to the body grazed Yan, but a later attempt led to a slip. Luckily for Faber, Yan couldn’t take advantage. Faber would then catch a kick, only for Yan to fight off the ensuing takedown attempt. Faber would land off the break in a clinch; Yan fanned with an uppercut. Not a ton of sustained action in the opening round, but rather a chess match. Both men would connect with hard strikes late in the round, and head to the second.

Faber started round two with a knee, and a big overhand that came up short. His leg kicks were connecting, but not necessarily doing much damage. The two would then engage in a quick exchange that ended with Faber holding on with underhooks. Yan was against the fence, but fought his way free. The next time they clinched, Faber ate a left, which was more of an elbow. He then dropped down for a leg, but Yan hopped and broke free. A moment later, he tagged Urijah Faber! Faber went down, and Yan bounced, launching bombs! Faber survived, got back up, and tagged Yan! A standing elbow then cracked Fabr and dropped him again! Yan took the back and landed more shots, as Faber stood back up. A bloodied Faber was somehow survived, only for the ref to stop the action, due to a hematoma growing below Faber’s eye. The doctor cleared him to continue, however, and they restarted in the previous position.

Urijah Faber, showing the heart of a fighter, somehow survived the second round. He would not survive the third. A head kick off a clinch caught Faber clean, and sent him crashing back to the mat. The ref made the save since left to his own devices Faber might have carried on. A smart stoppage, and a great fight. 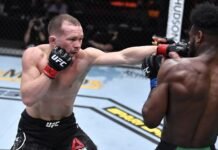