Ian Heinisch has taken the long and most unlikely road to the UFC.

Last month during UFC 244 fight week, Hollywood elite, Dwayne “the Rock” Johnson announced to the world that he was going to star in an upcoming movie about retired MMA fighter Mark Kerr. It looks like movie producers won’t be finished with telling stories about the MMA world as UFC 245 standout Ian Heinisch (13-2) could be the next person being portrayed on the big screen.

The middleweight spoke with Cageside Press recently and disclosed to us that his amazing story of overcoming personal demons and hardships and becoming one of the best fighters in the world has received offers to be turned into a book, movie, or even a six or eight part mini-series. The Colorado native said his manager, Jason House and some employees from the UFC are helping him reach the right possible deal. Heinisch believes a deal for it to be put into production could come as early as 2020.

Around 2006, when Heinisch was merely 18-years-old, his world was much different than it is today. The future UFC star was a drug addict. He was a frequent user of cocaine and ecstasy, while also being a heavy alcohol consumer. Just a year later, he went from user to a dealer, selling ecstasy around the city. Eventually after being arrested and getting out on bail, he decided to turn into a fugitive on the run and fled to Europe.

While overseas, Heinisch’s life didn’t get any better — it actually got worse. He eventually met a cocaine dealer and began to transport narcotics. He would travel to Columbia, where he wrapped large amounts of cocaine and transported the drugs in his stomach until a x-ray saw him caught in the act. Suddenly Heinisch found himself locked behind bars again.

This is where the Hurricane’s life began to change. Heinisch began to train in different forms of combat sports, including wrestling and kickboxing. However, the biggest change began when he started to read the Bible (in Spanish) and found faith in Jesus Christ.

When he was released from prison in the Canary Islands, he was shipped back to New York, where he was picked up at the airport and sent to Rikers Island prison. There he was placed in the high-security wing. After getting into a fight, Heinisch had a hit put on him by a gang— a stab-on-sight order. The morning he was expecting to die, U.S. Marshals arrived and took him out of the facility. Shortly after, he had the remaining time of his sentence changed to probation, and he was a free man.

“I don’t get tired of talking about it,” Heinisch said. “I feel like God put me on that path to turn my troubles into a testimony to inspire people. From where I came from, to do the things that I did to my body, from the things I’ve been through and to come out and be a top 10 in the world in the biggest promotion, is incredible. I am proud of that. I want to show what God can do in your life… I don’t ever get sick of it. I’m proud of it, and I have seen my story help change people’s lives.”

The biggest change might be his own. Shortly after being released, Heinisch would make his professional MMA debut amassing a 10-1 record and capturing the Legacy Fighting Alliance interim title. He would go on to compete on the Dana White Contender Series  defeating Justin Sumter and being rewarded with a UFC contract.

Heinisch didn’t get a typical start to his UFC career. He was thrown in with accomplished middleweight veterans Cezar Ferreira and Antonio Carlos Junior. The Colorado native pulled off two upsets victories which propelled him into the top 10 UFC rankings.

“I had the long road to the UFC and then I got thrown right in with killers,” Heinisch said.

The two victories set up a showdown with the highly ranked Derek Brunson in his last fight at UFC 241 this past August. Unfortunately, the Hurricane faced his first setback ultimately losing by unanimous decision.

“I learned a lot of stuff in that fight,” Heinisch said. “I needed to save some of my energy. I don’t want to make any excuses but I was pretty sick leading up to that fight but I was not going to pull out. I tried to get an early finish, coming out guns blazing. It didn’t work out and I slowed down as the fight went on. I’m usually the cardio machine guy but for that fight my body just wasn’t responding. No excuses, he was the better fighter on that night.”

Heinisch was scheduled to battle Brad Tavares in October but was forced off the card due to a concussion he suffered in training. After feeling 100 percent recovered from the concussion, he is slated to return this Saturday opposite the number 14 ranked Omari Akhmedov at UFC 245 from the T-Mobile Arena in Las Vegas, Nevada.

“I think it is a really good match-up,” Heinisch said. “When they told me about the guy, I called Zak Cummings, who was his last opponent and my teammate. I asked him what he thought and he thinks with my pressure and pace that it is the perfect match-up. It is good to have a coach that was right there for Akhmedov’s last fight. I am putting all my trust in my coach to train me accordingly. I am really excited for the match-up. I just think wherever it goes, I can wear him out and eventually knock him out. He is going to throw down, I am going to throw down. It is going to be a really exciting match-up. I expect a spectacular finish. Tune in. I got something up my sleeve.”

With a win or two, Heinisch believes he with be thrust right back into the middleweight title picture.

“I feel like I go finish Omari and take care of that and I will be right back in the running with the top 10 guys and be in the mix,” Heinisch said. “Jack Hermansson is a guy I would like to fight. That new kid Edmen [Shahbazyan] I would like to get in his face and make it a brawl and see how he does. We got our eyes on some stuff.”

Having overcome insurmountable hardships in his past, many have suggested Heinisch write a book about his life. However he doesn’t believe it is ready to be published just yet.

“The book is still being written. The last chapter is still being written right now. That is a large part of it and getting that belt is a huge stamp on the whole story. From somebody being rock bottom in a foreign prison cell five years ago to being UFC champion is just incredible. Whatever God wants to do in my life, I am willing to do. I have a message of hope which is Jesus Christ.” 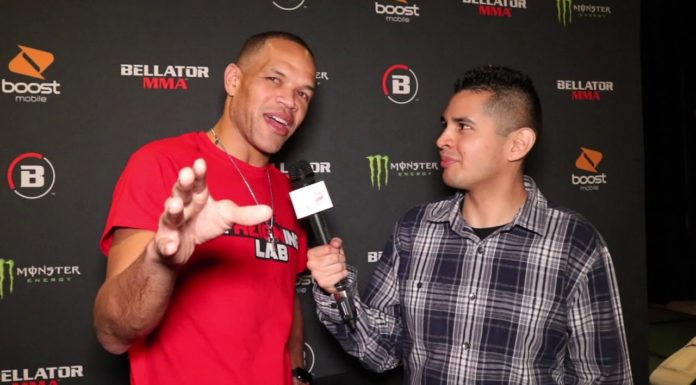