Holm made her UFC debut in February of 2015, where the former boxing champion was set up with title contender Raquel Pennington. The fight would be a competitive one, with Holm winning the bout via split decision at UFC 184. Holm notoriously would then go on to defeat Ronda Rousey later that year at UFC 193 via head-kick knockout to become UFC bantamweight champion.

However, following that win, Holm would lose the title to Miesha Tate at UFC 196. After that loss Holm would have her ups and downs, notably going 0-3 in championship bouts against Germaine De Randamie, Cris Cyborg, and Amanda Nunes. The Nunes loss, her most recent, came this past July at UFC 239.

During Holm’s struggles, Pennington would go on a solid win streak. She would pull off victories in four fights in a row against opposition including former champion Miesha Tate and Jessica Andrade. That win steak earned her a title shot, also against Amanda Nunes, where she would lose via fifth-round TKO.

However, following a win over Irene Aldana in the same month as Holm’s last fight, the two were matched up again. This time the pair were slated for UFC 243 in October.  However that fight fell through due to a hamstring injury suffered by Holm.  With the champion projected to return shortly, the pair have been added to January 18th’s UFC 246.

The fight is expected to be one of the top attractions on a card that features the return of Conor McGregor, who is expected to take on Cowboy Cerrone in a welterweight bout in the main event. The T-Mobile Arena is also expected to host a slew of bouts that night, including a lightweight showdown featuring former lightweight champion Anthony Pettis and surging contender Diego Ferreria. 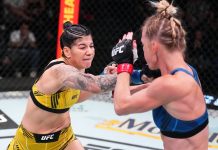