Anthony Pettis, ex-UFC and WEC lightweight champ, has been linked to a 155lb fight against Carlos Diego Ferreira in January 2020.

Former UFC and WEC lightweight champ Anthony Pettis is returning to the lightweight division. ‘Showtime,’ following a brief stint at welterweight, will meet Brazilian Carlos Diego Ferreira at a yet-untitled event on January 18, 2020. The lightweight clash was first reported by MMA Junkie.

The January 18 date was initially expected to be UFC 246, although no official announcement was made by the UFC. Following an update to the promotion’s website, it seems a February event in Houston is currently slated as the year’s first PPV. However, with Conor McGregor in negotiations for his return, things remain in flux. What is known is that Pettis vs. Diego Ferreira is the latest addition to a growing list of fights booked for the early January card.

Pettis (22-9) had two fights at 170lbs in 2019, knocking out Stephen Thompson in March at UFC Nashville before losing a unanimous decision against Nate Diaz at UFC 241. The 32-year-old has struggled with consistency since losing his 155lb title in 2015. In fact, he’s been unable to put together a win streak since then. Following a three-fight skid that started with the loss of his belt to Rafael dos Anjos at UFC 185, Pettis began trading wins and loses, which is where he stands today.

Carlos Diego Ferreira (16-2) has had no such difficulties. He’ll enter the fight with Pettis on a five-fight winning streak. Most recently, he earned a unanimous decision victory over Mairbek Taisumov at UFC 242 in September. 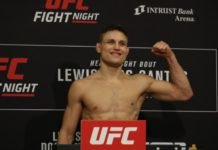