Claudia Gadelha and Alexa Grasso will throw down this January in a battle of ranked strawweights, according to a new report.

The UFC has put together a key women’s strawweight fight for early 2020. MMA Junkie was first to report that the promotion has booked Claudia Gadelha against Alexa Grasso for January 18, 2020. That’s the date expected to be UFC 246 in Las Vegas. However, the UFC’s official website is now listing UFC 246 for February in Houston, leaving a massive question mark as to what will happen with the January date.

The Las Vegas show has long been expected to hinge on negotiations with Conor McGregor, who indicated January 18 would be his return to the octagon.

In any case, at some point, MMA fans will be getting a clash between ranked 115lb’ers Gadelha and Grasso.

Grasso (11-3) was last seen dropping a majority decision at home in Mexico City to ex-champ Carla Esparza. Overall, Grasso is 3-3 in the UFC, with wins over Heather Jo Clark, Randa Markos, and Karolina Kowalkiewicz.

Gadelha (17-4), who previously challenged Joanna Jedrzejczyk for the strawweight title, is coming off her own win against Markos, at UFC 239 in July. She’s 4-2 in her six fights since that 2016 title challenge, which marked her second loss to Jedrzejczyk (the first came in a non-title bout). Gadelha has remained a constant presence at 115lbs, and is currently sitting at sixth in the UFC’s official rankings.

Brazil’s Gadelha was previously expected to face Cynthia Calvillo at UFC on ESPN 7 next month, but was forced out of that fight due to injury. 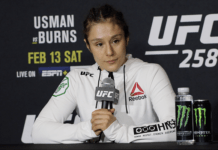