Fabian Edwards won a close decision with some questionable judging at Bellator London on Saturday, earning a split decision win over Mike Shipman.

Bellator’s latest trip to London, England was their final European card of 2019. Going down Saturday at the SSE Arena, the co-main event of the evening was populated by Fabian Edwards, brother of UFC standout Leon, taking on Mike Shipman at middleweight.

Edwards was an undefeated 8-0 entering the fight against Shipman, who was coming off a loss to Costello Van Steenis.

Edwards opened at center, with Shipman circling around him. However, their first clinch led to a low blow by Shipman and a brief pause in the action. Back underway, it wasn’t long before Shipman initiated another clinch along the fence. Tying up Edwards, he looked to land knees while trying to take the fight to the ground. He couldn’t get Fabian Edwards down, however, and wound up back in the open with him, at range. Not a good place to be, but Shipman survived what ended up being a close first round.

The second round had Edwards with his back to the fence early once again. This time Shipman had some success, and Edwards was on the mat roughly a minute in. Shipman worked to position him away from the cage, but Edwards fired off an upkick or two and was able to escape. Shipman then worked to take his opponent’s neck, hoping to wrench him back down, but Edwards broke free. He then went on the attack with half the second round remaining, landing a kick, but being forced to contend with another takedown attempt. While Edwards would make it back to his feet, he was only able to land a handful of strikes, including a left hand and some leg kicks, prior to the end of the frame.

Fabian Edwards came out swinging to open the third. However within thirty seconds, Shipman had landed a powerful takedown, driving through the attempt and landing it by the fence. Edwards would make it back up with over half a round remaining, but time was becoming a factor. He fired off a combo, connecting at the end, only for Shipman to secure a body lock and work for a takedown. Edwards would fight that off, and with a minute left, needed to make something happen. He did, tagging Shipman with an uppercut! A moment later, he landed a standing elbow in an exchange, following it up with a few more punches. Shipman was forced to retreat, and Edwards managed to force him down and get on top to finish the round! With Edwards clearly winning the third, whether the judges saw either of the first two rounds in his favor was the question.

Someone, one judge awarded all three rounds to Edwards, and ultimately he won a split decision. 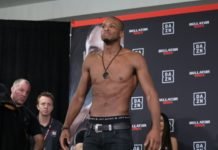 Bellator London: Who’s Next In Line