Featherweight prospect Aaron Pico will hit the comeback trail in January at Bellator 238.

Prospect Aaron Pico will return to action at Bellator 238 this January. Following an initial report by ESPN, Cageside Press has confirmed with a Bellator representative that verbal agreements are in place between Pico and opponent Daniel Carey. The event takes place January 25, 2020, with Julia Budd vs. Cris Cyborg for the women’s featherweight title topping the card.

Pico (4-3) was one of the most highly touted prospects in years to enter MMA. However he has struggled to find consistency, while facing opponents with years more experience than him in the fight game. A shock upset loss to Zach Freeman spoiled his debut in in 2017, however he did bounce back by winning his next four fights, against increasingly stiff competition.

Outings against Henry Corrales and Adam Borics more recently saw Pico stopped on both occasions. Notably and frankly rather wisely, Pico was passed over for the Bellator featherweight grand prix as a result.

A U.S. national championship winner in multiple wrestling styles, 23-year-old Pico left Team Bodyshop to train with Jackson-Wink MMA earlier this year. Carey (7-3), meanwhile, is an LFA veteran who has appeared five times in the Bellator cage, mounting a 3-2 record. He’ll enter the fight with Pico off a win over Gaston Bolaños in September.

Bellator 238 will take place at The Forum in Los Angeles (Inglewood), California on January 25, 2020. 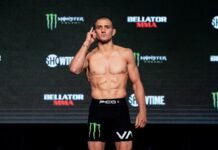 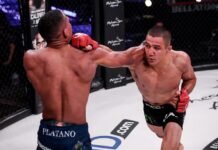