“If anybody’s the fighter of 2019, I definitely think it’s that kid,” Dana White said of Jorge Masvidal following UFC 244.

New York, NY — There was a clear winner in Masvidal vs. Diaz at UFC 244, regardless of how it ended. And while UFC President Dana White initially had some reservations about the doctor stopping the bout due to a cut over Diaz’s eye, it was a decision he came around on.

White said as much speaking to reporters including Cageside Press following the event. “These things happen. At first I was bitching and pissed off, and I said ‘they didn’t stop the Tyson Fury fight, and that cut was nasty and whatever.'”

“Then I walked back and I saw Nate Diaz, and his eyebrow was literally flipped over in front his eye, and he had another huge gash under his eye,” he continued, “and then I started thinking, it’s easy sitting over there in my chair thinking the fight shouldn’t be stopped. The reason we love Diaz so much is he’s so tough and durable and everything else, but I don’t know. These things happen. It didn’t look good.”

Diaz did not look good after the fight, but he was certainly willing to continue on in it. While the doctor stopped that, Diaz, Masvidal, and the entire arena almost immediately called for a rematch. It’s not something that White feels needs to happen right away, however.

“No, it doesn’t interest me right away,” he said of the possibility. “I got asked a couple questions tonight. ‘Diaz comes on in the later rounds, if this fight had gone later, they didn’t stop it, what would happen?’ Whatever. But it didn’t. It got stopped with cuts. Masvidal looked very dominant. He looked good. He’s looked good all year, he’s had nothing but great fights all year. If anybody’s the fighter of 2019, it’s definitely that kid. I think he’s got some big options coming his way.”

White didn’t elaborate on what those options are, but the winner of Kamaru Usman vs. Colby Covington seems like a very real possibility.

“We’re sitting there and MGM called and said ‘You guys are halfway through your co-main event right now, people are losing their minds here. Can we show the Diaz fight at the MGM?'” White recalled. “And I was just like ‘holy sh*t, this is crazy! This is getting crazier by the minute.'”

In his wildest dreams, White would never have imagined the scenario playing out. “It was nuts. Of course we said yes, they did, and… wow.”

Don’t take it as a statement on the health of either sport, however. “They’re not showing my main event at their cards because somebody won and somebody lost. It’s a much bigger picture than that,” White added.

Watch the full UFC 244 press conference with Dana White above. 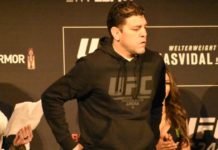