Kelvin Gastelum had no one to face off with Thursday, but that didn’t stop him from posing for the cameras at the UFC 244 media day.

Nate Diaz wasn’t about to face off with Jorge Masvidal at the UFC 244 media day. And Darren Till was still in transit. But the rest of the New York card did square off in a photo op for the throngs of media members on hand for the event.

UFC 244, of course, will crown either Diaz or Masvidal the “baddest motherf*cker,” complete with a specially commissioned BMF belt to commemorate the occasion. But beyond those two scrappy fighters, there’s a deep card with plenty to love going down at Madison Square Garden on Saturday.

Blagoy Ivanov gets his shot at the top five. Johnny Walker vs. Corey Anderson could be a title eliminator. Katlyn Chookagian and Jennifer Maia might be looked at as one as well, although Maia did herself no favors by missing weight for the fight Friday morning.

Top propect Edmen Shahbazyan is in action, taking on Hawaii’s Brad Tavares, returning for the first time since his fight with Israel Adesanya. Old dog Andrei Arlovski, the former featherweight champ, looks to get past the hard-hitting Jair Rozenstruik.

See (most of) the UFC 244 stare each other down in the gallery below! UFC 244 takes place Saturday, November 2, 2019 exclusively on PPV in North America. 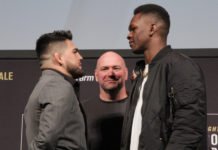 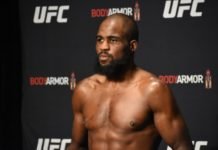