John Lineker made his debut at ONE Championship’s Dawn of Valor, while the welterweight title changed hands.

Dawn of Valor went down on Friday in Jakarta, Indonesia, bringing with it a welterweight title fight and the debut of John Lineker. With Lineker representing another big free agent acquisition for the Asian MMA outfit, a lot was riding on his coming out party. In the end, he did not disappoint, slugging it out with Muin Gafurov for three full rounds.

Things did not go Zebaztian Kadestam’s way, however. With his welterweight title on the line, the Swede found himself battered by Kiamrian Abbasov for the better part of five rounds. When the dust cleared, Abbasov won a unanimous decision, becoming the second fighter since Ben Askren’s departure to hold welterweight gold in ONE.

Full results, plus photo highlights, can be found below!

ONE Championship: Dawn of Valor Results 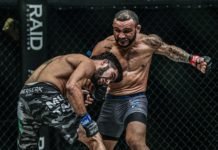 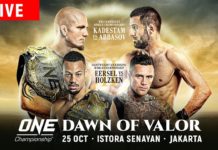 ONE Championship: Dawn of Valor Live Stream and Results 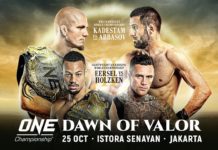 ONE Championship: Dawn of Valor Weigh-In Video and Results