With UFC Singapore, Ben Askren once again had a chance to top the bill at the Singapore Indoor Stadium, opposite the always-dangerous Demian Maia.

The UFC is in Singapore this weekend, with a Fight Night card that will reunite Ben Askren with the Singaporean faithful in Kallang. Opposite Askren will be dangerous BJJ standout Demian Maia, in a fight that promises to be a grappling fan’s dream. The bout has Askren looking to bounce back from the first loss of his career, after he was caught by a Jorge Masvidal flying knee earlier this year.

In co-main event action, Michael Johnson and Stevie Ray throw down, with both men looking to get back in the win column.

The Singapore card is an early one for fight fans in the west, and the weigh-in is already in the books. The full card made weight — check below for full results. 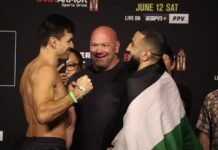 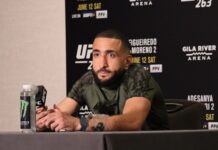