Deiveson Figueiredo looked brilliant at UFC Tampa, securing a first-round submission over Tim Elliott. He then called out Joseph Benavidez.

Deiveson Figueiredo has been on a tear since entering the UFC, going 5-1 with three TKOs and the lone loss coming to perennial top contender Jussier Formiga. He’ll be battling the funky stylings of Tim Elliott, who is most known for giving Demetrious Johnson all he could handle after winning The Ultimate Fighter. Elliott has not fought since 2017, when he won a bout at bantamweight before returning to flyweight at UFC Tampa.

Deiveson Figueiredo went right after Tim Elliott, landing a hook out of the gate. Tim Elliott was using his unique style to land shots from awkward angles. Figueiredo would dive in with heavy punches and Elliott would roll off with an upward elbow. This exchange happened twice before Elliott shot for a takedown and landed right into a guillotine choke. Figueiredo locked it up and held on a touch too long, angering Elliott after the fight was stopped.

🇧🇷 Figueiredo locks up the guillotine for the first round submission at #UFCTampa pic.twitter.com/1cidmeHbaP

In his post-fight interview, Figueiredo called for an interim title fight with Joseph Benavidez with his reasoning being that Henry Cejudo will not fight at flyweight until next year. It was a spirited call out, but he’ll likely come up empty-handed.

Elliott will now have to go back to the drawing board after bouncing around weight classes. To be fair, Figueiredo is a very rude welcome back to the flyweight division. 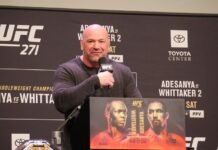