Successful MMA debut behind her, Bellator 228’s Ava Knight, the Lady of Boxing, discussed what comes next.

Los Angeles, CA — The Lady of Boxing made a successful debut at Bellator 228, as Ava Knight earned a second round TKO against Shannon Goughary. With her debut under her belt, Knight reflected on the win with the media post-fight.

And it sounds like there’s more to come. “It feels really good. It’s a very new experience, but it just felt like another fight,” said Knight, speaking to Cageside Press and other media outlets.

Ahead of the fight, Knight had been clear that she’d been training for takedowns. As a boxer, it was no big secret that she’d be tested in that area. “Everything that I learned in camp is what happened in that first round,” she said. The first saw her taken down, but Knight persevered. “It was useful, I remembered it and used it to my advantage. If I had to sit there and just let it sit out for the rest of the round, that’s what I knew I had to do.”

She also got shout-outs from celebrity students Chris Pratt and Joe Jonas. “It’s great, because we’re all in the gym together, we all fight together, we all throw punches at each other, so it’s good just to see that support.”

But as for the fight itself, Knight was calm under pressure. A decade-plus boxing career with titles in multiple weight classes no doubt helped. “I felt calm. I just knew everything I that I learned I was going to have to use, and if I didn’t, I was just going to do what I’ve done my whole career.”

In short, “stay calm, don’t do anything stupid, if you can’t get back up, just find somewhere you can sit down, and make you stand make up,” she said.

And when she found herself caught in a triangle, it was tight, but “not tight enough to make me stop,” Knight said, pointing out that even in the triangle, her opponent was breathing heavier than she was.

As for what comes next, she’ll be juggling two sports it seems. “I know they wanted to have me to box in four weeks, we’ll see if that happens. If not, we’ll see if Bellator wants another fight in January, February.”

“I love boxing, it’s something that I’ll always have in my heart,” Knight added. “I’ll never give it up, but I love this too.” 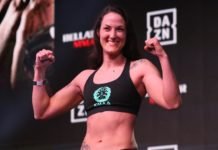 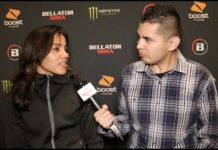