Bellator 238 was a family affair for Emilee King, whose husband Jason King was also fighting on the card.

What if any value Ava Knight’s MMA experiment has, outside of entertainment value at least, won’t be known for a while. Decided, of course, she opts to stick it out in MMA for the long term. She returned to the cage on Saturday night at Bellator 238 in Los Angeles, California.

The fight at The Forum simply did not go Knight’s way. An IBF and WBC boxing champ in a couple of weight classes, her hands didn’t matter in the end. She barely got to use them.

Instead, the fight ended on the ground. Opponent Emilee King, a .500 fighter who was 3-3 to start the night, was game enough on the feet. Still, it didn’t take long for her to decide to take the fight down. King looked far more comfortable on the ground, and soon locked on with an arm-bar. Knight, however, survived, at least for the time being. She worked back to her knees. However, she risked giving up her neck, and King, working on a kimura briefly, moved in for a rear-naked choke. While high on the back, King managed to flatten Knight out. The choke was in tight. Knight appeared to go out, and whether she tapped or not, the fight was over regardless.

Knight falls to 1-1 in her MMA career, but this should be a lesson she can build from if she’s serious about the sport. For King, it’s the biggest win of her career — and her husband was due to fight immediately after her, against kickboxing champ Raymond Daniels. 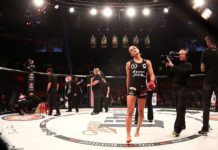