Returning to the UFC for the first time since 2016, Nicolas Dalby looked impressive against the always dangerous Alex Oliveira at UFC Copenhagen.

Welterweights Nicolas Dalby and Alex Oliviera opened up the UFC Copenhagen card on Saturday. Brazil’s ‘Cowboy’ had lost two straight, to Mike Perry and Gunnar Nelson. He was looking to correct course opposite Dalby, who was making his return to the UFC after going 1-3-1 there between 2015 and 2016.

Dalby attempted a jump knee attack in the first minute, and it felt like this pair were promising something big. Dalby would chase after Oliveira moments later, swinging on his way in, adding a high kick. Oliveira escaped, and later threw a high kick, but again Dalby pressed the action. The pair would eventually move to the fence, Dalby in control, working to trip the taller man. However, Oliveira reversed, and got Dably down. Dalby employed butterfly hooks from the bottom, which stalled Oliveira briefly. He’d eventually settled on dropping a few big punches and elbows while Dalby scrambled and took control right at the buzzer.

Fighting wild was likely to cost one man if the action continued as it had in the first. It was Dalby on the attack early in the second, connecting. Oliveira stayed on his feet, but was at least partially rocked. They’d go to the ground next, Dalby in control, a full three minutes plus left in the frame. He was able to land some heavy punches to the face, but at the end of the round, back on the feet, Oliveira would tag Dalby with a left.

Round three opened with a Dalby leg kick. After spending too much time on his back in the second, Oliveira would be looking for a finish. Dalby shot for a double leg, which forced Oliveira, who defended with a guillotine, to the fence. Dalby popped free of that and wound up reversed. Oliveira soon soon dragged Dalby down. He moved to side control, looking to create space to drop some elbows.

However after a minute or so of work, the ref stood them up, something of a questionable decision. Oliveira took the fight right back down, and transitioned — super slick — into an arm-bar attempt. That backfired however, as Dalby was able to move to mount. Dalby flirted with an arm-triangle choke, then settle with good ol’ ground n’ pound. He might have been seconds away from a finish, but Oliveira was saved by the bell. There was no saving him from the judges, however, as Dalby had it in the bag.

After the bout, Dalby spoke of how much work it took to get back to the big show. He added that “I feel like I could have done a better performance, but that doesn’t matter, because what matters is what I did in this cage.”

Finally, off a big win against a tough-as-nails foe, Dalby went for a call-out, “Mike Perry, if you’re not doing anything December 14, I’m down to scrap in Vegas” he promised. Not a bad pairing, if Perry is healthy and ready to go. 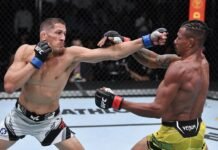 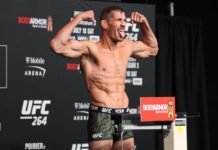