Short notice replacement Roman Salazar was short work for James Gallagher at Bellator: Dublin on Friday at the 3Arena.

The main event of Bellator: Dublin, a split card with Bellator 227, saw James Gallagher taking on short-notice replacement Roman Salazar. Salazar, a UFC vet, missed weight for the fight, but took it just a week out, after Cal Ellenor was forced to withdraw.

So perhaps Salazar can be forgiven for the miss at the scales. But he’ll probably take some heat after being quickly submitted by the ‘StrabAnimal.’ Gallagher force the submission in well under a minute.

Both fighters started by feeling out their timing but, Gallagher suddenly went for a flying knee. Salazar caught that, following which they went to the ground, but Gallagher locked in the guillotine choke and shortly after, Salazar was forced to tap, ending the fight.

And who was sitting cageside to take in the action and celebrate with his teammate but UFC star Conor McGregor. Gallagher hopped the fence to join McGregor following the win, but with spirits high, there was no real concern about that particular exit.

Watch pretty much the full fight and post-fight celebration below!

A very quick guillotine submission and a celebration with teammate "The Notorious" Conor McGregor. #BellatorDublin pic.twitter.com/sBIjM9a6Xc 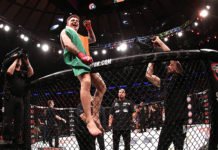