As the featherweight grand prix kicks off at Bellator 226, Sam Sicilia isn’t expecting any point fighting from Pedro Carvalho.

Sam Sicilia is one of a small army of fighters to have made the jump from the UFC to Bellator MMA in recent years. In Sicilia’s case, it was a move born out of necessity, as the UFC released him in 2017 following a three-fight skid. Spokane, Washington’s Sicilia, however, has made the most of the opportunity afford to him: after going 2-1 in Bellator, he’s landed in the promotion’s featherweight grand prix, with a cool million dollars on the line.

Sicilia (17–9) is on a roll right now. Sikitsu, where he trains alongside the likes of Michael Chiesa and Austin Arnett, has a new facility being built. He’s coming off a win over Bellator mainstay Derek Campos. And, of course, he’s taking part in the grand prix, kicking off at Bellator 226 this weekend in San Jose, CA.

Looking back at the Campos fight, Sicilia told Cageside Press recently that “it was a great scrap. Fun to be in.” Sicilia had been dealing with injuries during the final weeks of his camp for the bout. “Nothing serious, nothing structural, but I ruptured a bursa sac.” That resulted in having the knee drained, and wearing a compression sleeve on the knee.

“Fighting through it and getting the win, the weight of the world was off the shoulders after that,” Sicilia recalled. “We knew we were going to scrap with a heavy hitter, and a guy with a big heart really. We kind of knew it was going to be that fight. Kept the defense up and came forward, and got the win.”

As a takeaway, “I thought my defense looked a little better,”Sicilia said. “Instead of just trading one-for-one, I was high-blocking and getting on the inside a lot better than I have.”

The Campos fight went down in scenic Hawaii, an experience he deemed “amazing.”

“The crowd, sometimes they boo people or whatever, but in Hawaii, they just cheer for a good fight,” said Sicilia. “The troops, getting to talk with them and take pictures with them, it was a pretty awesome experience.” The scenery didn’t hurt either. “The layout and where it is, it was something special. Everybody was high energy and ready to fight for the crowd. It was a good experience.”

Now, he moves on to Bellator 226 in San Jose this Saturday, and the opening round of the Bellator featherweight grand prix, a DAZN exclusive. Tournaments, of course, call back to the very roots of the sport. Sicilia’s reaction to the concept was simply that, “the more you go on and the more you learn about how the format is, it’s super exciting to me. You get the match-up, and they do the drawing and everything. Really it’s just super exciting. It’s not about who has more Twitter followers and sh*t like that. You win, you get to keep going on. Which I think is the best way to do this.”

The drawing Sicilia mentions is actually after the opening round. The winners will then be placed into a random draw to determine the next round of the grand prix.

Sicilia himself was a fan of the tournament format back in the day, when promotions like the UFC and PRIDE utilized it. “Absolutely. I loved it. The tournaments and stuff. Those were fighters,” said Sicilia. “Now the sport has balanced out to where you’ve got a sport and a fight. But to see how this is shaping out is awesome. It makes it a little more about the fight than the lifestyle, which is great for the fighters. The fans get it too. There’s no excuses, the best guy wins, the best guy gets to move on.”

To be the guy who moves on, “it’s all about who can string them together. You take it one fight at a time, you can rally through this thing. If not, you’re watching at home. You don’t want to be that guy.”

It’s important to remember that Sicilia has some experience with the tournament format. The Pacific North West fighter appeared on The Ultimate Fighter 15, better known as TUF: Live.

“I’ve been in one of these before,” he pointed out. And really, it was a strong tournament back then. “If you shuffle the deck and have everybody fight again, I think you’d get a different winner every time,” Sicilia said. “But the thing is, my teammate figured out a way to show up every single fight. Focused on one fight at a time, and won the whole thing. And Mike [Chiesa]’s doing great now.”

“Everybody on that season is talented. Al Iaquinta, and Myles Jury now with Bellator. The TUF Live season I think was one of the most talent-stacked ever,” Sicilia added, before noting that it was “one of the longest, too. It was grueling. I took a lot away from that experience. And having my teammate have won it, I think it’s super helpful to get your mind right and get where you need to be to win this thing.”

“Then you do the drawing,” he continued, “then you have a little bit of control over what happens, or you can kind of use some visualization to see where you can do, whatever happens in the drawing.” At the very least, you can see how the brackets could play out.

Ultimately, said Sicilia, “it’s about getting to that next level, one fight at a time. Then you have a five round fight. And you have enough time to prepare for a five round fight. They’re giving you enough time and notice, so it’s all about what’s right in front of you. I believe if you look past the guy that’s in front of you, you’re going to be watching from home.”

Sicilia’s opponent to open the grand prix is Pedro Carvalho (10-3), who enters the fight on a five-fight win streak. “I think he’s a tough hungry up-and-comer. He trains with a top gym,” Sicilia observed. “It’s a tough fight,” he said, but at the same time, “it’s a great fight for me. It’s great in the way that he’s an actual fighter. He’s not going to try to point me and run away with a decision. He’s going to fight. That’s what I like to be in, that’s what I like to train for. That’s what I see in this.”

“Chins will be tested, leather’s going to be thrown,” he continued. “You’ve got to bite down on your mouthpiece and win this one. That’s what I like training for.”

The other twist is that Carvalho’s “a young guy, and I’ve got a lot of experience, it’s one of those match-ups.” The question, for Sicilia, is whether he’s able to utilize “all my experience and win, or does he walk away with it? The awesome thing is, we get to find out, we get to go club each other.”

Despite recognizing that he can’t look past his current opponent, Sicilia did admit that he would like another crack at Emmanuel Sanchez as the tournament progresses. The pair first met at Bellator 198 last year; Sanchez won via submission. “I felt like I didn’t bring my A-game, and he did,” Sicilia explained. “That’s what happens. How else would I ever get a rematch with him? But, this tournament happens, somehow the planets align, and I get that back.”

“Obviously no disrespect to him at all, but that’s a fight— obviously, every fighter that loses wants that one back.” Sicilia would love it if it would work out in this case.

“No,” Sicilia said bluntly when asked if he ever expected to see a million dollars on the line at this point of his career. It’s a common refrain among the grand prix competitors. “To be honest, tournaments, the way they’re doing things, the way that Bellator’s going with this stuff is super exciting to me. Because I couldn’t have dreamed this sh*t up.”

“The way it is, it’s so much easier just to focus on. You’re also fighting for a little bit of stability,” he continued. “You even win fights and you’re out for eight months. This, you win, and you get to keep fighting. That’s all that matters. Then you’re on to the next. You know you’re in the tournament, you know you have a fight. In a sport where you really sacrifice stability, this tournament brings stability to the winner.”

“That’s what it’s about, winning. That’s where your focus has to be,” Sicilia told us. And the money, well, “that’s life changing money.”

Sam Sicilia meets Pedro Carvalho at Bellator 226 this weekend at the SAP Center in San Jose, CA. The main card airs exclusively on DAZN, kicking off at 10PM ET. 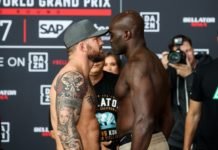 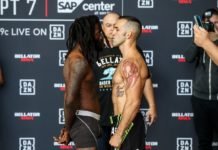