Ryan Bader was in the driver’s seat against Cheick Kongo at Bellator 226, dominating the fight early on. Until an accidental eye poke ended the affair.

At the top of the Bellator 226 card in San Jose, California on Saturday was Ryan Bader. ‘Darth’ Bader held both heavyweight and light heavyweight gold in Bellator, having won the heavyweight grand prix earlier in the year. Now, he was back to defend the heavyweight title, against a fellow UFC alum in Cheick Kongo. Kongo entered the night on an eight-fight win streak, and was fired up to finally get his shot at the title.

Bader? He’d won seven straight fights himself, dating back to his UFC run. His double-champ status was about to be tested, however.

Bader opened with a left jab, then tagged Kongo with another left. Kongo then changed levels with his back against the fence, trying for a takedown. Bader whiffed on an uppercut. Another jab landed for Bader. Then Bader changed levels, taking Kongo down and moving to half-guard. He easily stepped to side control. Kongo’s initial defense was to hold on for dear life. That failed when Bader stepped into mount. Kongo then began working his way to the cage, getting his back against the fence. Kongo tried in vain to wall walk up, but Bader locked up his opponent’s leg with his own. An eye poke by Bader then halted the action, and looking at it again, it was a bad one.

The doctor was brought in to examine Kongo, and after a brief consultation, the bout was waved off! A sad end to a fight that had Bader in the driver’s seat. Chances are, Bellator will be looking to run this one back.

After the fight, Rampage Jackson, teammate and corner for Kongo, got into it with Bader, leading to the pair being separated.

Official Result: Ryan Bader vs. Cheick Kongo ends in a No Contest due to a doctor’s stoppage (eye poke), Round 1, 3:52 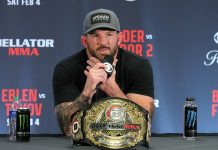 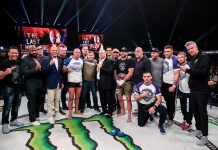