ONE Championship will bring a total of 22 bouts to Tokyo, Japan this October as part of its ONE: Century double-header.

ONE Championship’s monumental 100th event will be a double header. On Sunday, ONE officials announced the full line-up and broadcast plans for the show, going down in Tokyo, Japan this October. The card, split up into Part 1 and Part 2, will take place the same day, with ONE: Century Part 1 airing live on TNT in the United States. That show will be headlined by ‘Unstoppable’ Angela Lee taking on Xiong Jing Nan of China.

It will be the second meeting between Lee (9–2) and fellow champ Jing Nan (14-1) after Lee failed in an attempt to move up to strawweight back in March. This time, it’s Lee’s own atomweight belt that is on the line.

ONE: Century Part 2, meanwhile, will be broadcast live in over 140 countries, per Sunday’s release from the promotion. Topping that card will be double champ Aung La N Sang defending his light heavyweight title against heavyweight champion Brandon Vera. A trio of co-main events will accompany ‘The Burmese Python.’

The first will feature Bibiano Fernandes defending the bantamweight title against Kevin Belingon, while a flyweight Muay Thai title fight will see Rodtang Jitmuangnon defend against Walter Goncalves. The third co-main event (is that a co-co-co-main event?) sees the finale of the featherweight kickboxing grand prix unfold between Giorgio Petrosyan and Samy Sana.

ONE: Century takes place Sunday, October 13 at the Ryogoku Kokugikan in Tokyo, Japan. 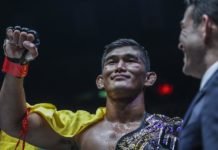