A lengthy injury layoff behind him, Gavin Tucker reflects on UFC 240 before looking ahead to the next step in his UFC career.

After what seemed like an excruciatingly long absence due to injury, Gavin Tucker returned to action at UFC 240 in Edmonton, and did so in style. The East Coast Canadian, who splits his training between Halifax and Montreal’s famed TriStar, earned a third-round submission over South Korea’s Seung Woo Choi.

It was certainly a return to form for Tucker — who also returned to social media recently, after something of an extended vacation. “I just needed a break. I feel like sometimes you get so caught up in these weird little things and hype trains and the whole f*cking vapid culture of people being people. I just wanted to dehumanize for a second, or become more human or something. I just needed a break from it.”

It’s a common sentiment in MMA these days. “It’s sad sh*t, man. And honestly it’s not just the MMA thing in general. But honestly the MMA thing, is the whole hype train and stuff.”

“At the end of the day there’s not a single fight in the UFC that’s not a tough fight, not one.”

The hype train subject is one that Tucker, who came into the UFC as a hot prospect, addressed further. “Everyone in the UFC is tough,” he pointed out. “These guys just got two arms and two legs. I know there’s a skill discrepancy in the top level guys, they’ve worked their way up and gotten used to what it feels like. But at the end of the day there’s not a single fight in the UFC that’s not a tough fight, not one.” Getting “a little bit of space” from talk of hype trains and who should beat who allowed him to “focus as hard as I could on training. So I ended up giving this fight [with Seung Woo Choi] a lot of respect.”

The results are self-evident. A third round submission win. Now, Gavin Tucker is back to training, back to preparing for the next one. As part of that, he has gone back and reviewed the Choi fight in the days since it went down.

“I watched it with my boxing coach,” he told us. “Basically just critiquing little mistakes from the fight, and deciding what was good so we can look at what the next opponent’s coach and team is going to look at for the next one. We can shake it up, and use what they think I’m going to do to the advantage of our next one.” Anticipate, and counter, before the fight ever begins. “The things that I did wrong, fill in the holes so that I can use that to my advantage, of what people think they see as well.”

He has few regrets about his UFC 240 performance, mind you. Although Tucker feels that for one, he should have worked more on a couple of drills TriStar coach Firas Zahabi had showed him. He also feels he could have done something to seal the deal sooner.

“I definitely wasn’t feeling myself from it, to let him go three rounds, to take shots, but I was happy I got in, and shook it off,” said Tucker. “And I’ll tell you, Choi’s tough.” Part of that, feels Tucker, is his Korean heritage. “People talk about Mexican boxing spirit, I think Koreans are somewhere in that upper echelon of toughness. I mean that as a compliment.”

Remember Tucker’s comment about everyone in the UFC being tough? Case in point. Choi may not be the best known fighter. However, “people don’t know, but he’s got a lot of wins in kickboxing, Muay Thai, and a pro boxing record. I was happy with myself and the way I dealt with him.” His use of the check hook, cutting his opponent off at angles, making him hesitant to use his aggression, all factored in the win. And being able to “stop him from using that half-step back right hand that he’s accustomed to.”

So overall, “I was pleased some, but you always look back at what you could do better. I’m not really the type to pat myself on the back. I rarely leave a training session and focus on what I do well. I tend to focus on my disasters a little more.”

Many saw Tucker’s fight with Rick Glenn as one of those disasters. The bout left him with four broken bones in his face. Asked if the regional scene had prepared him for the step up in the UFC, Tucker explained that “before on the local circuit, you’d kind of get fired up, and in a lot of cases you can just run through guys based on just raw emotion, and being hyper-aggressive. That just doesn’t happen in the UFC. So forced composure, and you get to see the fighting obviously at a much higher level.”

That having been said, “I fought really tough guys” on the local circuit, “some really tough Canadian guys here. Every fight’s a fight, you progress, if you’re training hard and progress between fights, you’re supposed to get tested. People argue maybe that Rick was too much of a step up for me, but I don’t think so. I just think the approach was wrong. I’m always looking to get that fight back, run it back, and get that again.”

In reality, there are tough fights everywhere, inside the UFC and out. “I don’t feel like if you’re progressing properly between your fights that [the UFC is] a step up in competition,” Tucker stated. “Obviously The UFC caliber is much higher, the pressure’s higher, the showcase and the hype machine, production, the lights and the shorts and all this other sh*t that goes into this stuff changes. But ultimately it’s a fist fight. I think anyone who’s practicing seriously, if you go to TriStar, you’ll find some amateurs that are absolute killers, they’d give UFC caliber fighters a very difficult time. There’s a lot of skill in the world that’s kind of untapped.”

And before you ever get to the UFC, he added, “you kind of have to go through being in the lifestyle of being a fighter.”

You’re basically on the line every time.

Comparing MMA to the sweet science, Tucker noted that “it’s not like boxing at all, where you get built up, you have a promoter who runs a promotion who builds you, and gets you fights, and flies in partners, and flies in opponents. You’re basically on the line every time.”

“So you can expect some bumps, scars, bad nights, bad weight cuts, losses, busted faces and all this other stuff,” he expanded. “But ultimately if you just stay with it and never lose heart, you’re going to find some success I think.”

Tucker is an example of a fighter who has stayed with it, reinvesting in himself between fights. With the win in Edmonton, he’ll be back out at Montreal’s TriStar, which continues to find success. This past weekend, it was Nasrat Haqparast’s turn, at UFC Newark.

“It’s awesome. I love Nasrat. Nasrat’s a f*cking killer, he’s such a good guy. He’s devoted to his lifestyle, his religion and everything else. You can’t help but admire this guy, and want to see the best for him,” Tucker said of the TriStar lightweight. “The attitude, the positive attitude coming in, and just the absolute love of sparring, the love of fighting, is pretty good. That gym is good. Firas [Zahabi, head coach] fosters that kind of attitude. I don’t get to be there as much as I want to, my home is in Halifax, I have to travel, make money to travel. But now that I have a bit of money in the piggy bank, I’m going straight back there, and going to devote a lot of time to the place.”

Yet while being around that atmosphere is great, a full-time move isn’t likely for Gavin Tucker. Tucker has lived in Montreal for as long as eight or nine months at a stretch, but at heart, he’s a small town guy. “It’s difficult for me to be in the city.” Montreal is a beautiful city, he said, “but it’s not what I’m there for. I missed the Halifax lifestyle. And the striking. I like being in Halifax where I have access to a lot of boxing gyms and sparring partners. My crew here at Titans is very strong as well, they put a lot of focus into striking. I like to be able to have to option to go back and forth.”

With both Titans and TriStar, Tucker should be well prepared for his next endeavor. And there’s one more card in Canada this year. “I mentioned to Sean [Shelby, UFC matchmaker] about potentially getting on this one or Denmark. I like the Vancouver card, I don’t know who they’d bring up.”

Tucker, however, is willing to fight anyone. Or seemingly everyone. “I like the San Francisco card, I know Matt Sayles, he just beat a fellow Canadian Kyle Nelson. I like his boxing style, we’d have a banger fight,” Tucker suggested. “I like the Denmark card, the potential of David Teymur is there, I really like his style, the Dutch style of kickboxing and Muay Thai, that’d be a banger. If we get the New York card, I know Julio Arce is from Queens, that’s a possibility. Mike Trizano who is also out there is a possibility, he’s 2-1. I’m sticking with the guys with matching records to me right now.”

Of course, David Teymur has been plying his trade at lightweight. Brother Daniel has been down at featherweight. You get the feeling, under the right circumstances, Tucker would be game for just about anything.

Dan Henry, Nad Narimani, Shane Young — Tucker’s willing to go to Australia — are other names on the radar. “There’s a lot of potential there. Personally, I like all of them, but there’s a couple I really like. I think the Teymur fight would be really exciting. He throws vicious overhands, tries to kill, comes forward, difficult to finish, difficult to submit.”

“That’s the kind of style I really like to fight,” said Tucker. “Sayles too, I like that fight a lot. I don’t want to call anyone out. Basically anyone on the roster. I’m pretty easy. I’ll definitely make my attempt to drop my suggestions, but at the end of the day I don’t have a choice.”

Once again, it’s the difference between MMA and boxing. “It’s not at all like boxing. You can turn it down, but it becomes pretty well known if you’re the guy that doesn’t take fights.”

Gavin Tucker isn’t going to be that guy. Instead, after so much time away, “I want to be active this year.” With performances like UFC 240, that shouldn’t be an issue. 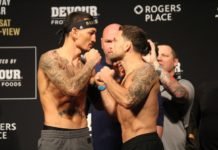 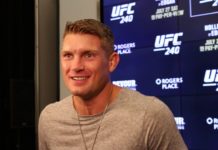 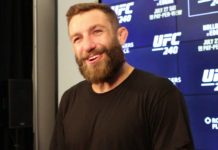