With the UFC reportedly heading to San Francisco in October, a key flyweight match-up has been set, as Deiveson Figueiredo will meet the returning Tim Elliott.

The flyweight division continues to, well, continue. On Tuesday, Brazil’s Combate first reported that Deiveson Figueiredo, fresh off a Fight of the Night performance at UFC 240, would return in October against former title challenger Tim Elliott. The card in question is expected to be UFC San Francisco (UFC Fight Night 161), although the location and venue have no been officially announced.

Figueiredo (16-1) got back in the win column in a big way by defeating Alexandre Pantoja at UFC 240 last month. The victory saw the Brazilian bounce back from the first loss of his career, to Jussier Formiga in March. After the Pantoja fight, Figueiredo was looking for an interim title bout with Joseph Benavidez, but UFC President Dana White told Cageside Press at the UFC 240 post-fight press conference that Benavidez would likely get the next shot at Henry Cejudo.

So instead, the promotion has matched Figueiredo up with the returning Elliott (sorry, Matt Schnell), who has not fought since picking up a win over Mark De La Rosa at UFC 219 in 2017. Elliott (15–8–1) is 2-2 in his current UFC run, but that includes a title fight loss against Demetrious Johnson, in one of the more challenging bouts of Mighty Mouse’s UFC title reign.

Elliott has been on the sidelines after surgery to repair a torn ACL.

UFC Fight Night 161 is expected to take place at the Chase Center in San Francisco, CA on October 12, 2019. Currently scheduled for the event are the following bouts: 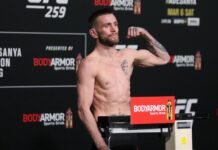 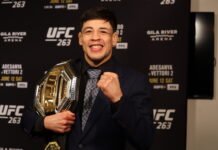