Japanese star and former Invicta FC fighter Mizuki Inoue is joining the UFC, and will make her debut at UFC Shenzhen later this month.

The UFC is coming to Shenzhen, China inside the Universiade Sports Centre on August 31. The card is headlined by UFC strawweight champion Jessica Andrade defending her title against rising star Weili Zhang. With seven bouts already announced, there are already six debuts slated. Luana Carolina was set to take on Yanan Wu but Luana pulled out due to injury. Now, Invicta FC veteran Mizuki Inoue will step in on short notice in enemy territory. The news was first reported by RealFight.ph, and later confirmed by Inoue.

How Inoue will fare in the UFC:

Inoue has good experience in shoot boxing/kickboxing going 11-2. Despite that, in her MMA career, she has solely got it done on the mat with her jiu-jitsu. Of her nine finishes all have come by submission. With a strong ground game, Inoue isn’t afraid to stand and trade. She has good qualities such as her jab and her check right hook as her shot selection is pretty varied. What she struggles with on the feet is her speed. Especially when she’s the one pressing; as a result she finds more success counter fighting. She can outdo the bottom tier of the 115 division on the feet but will have a tougher time once she fights top-flight talent.

Inoue, however, excels on the mat and her wrestling to get it there is good. She has a solid execution on the single leg and does a commendable job chain wrestling. Most of her takedown attempts are initiated in the clinch, so she relies on her forward pressure and footwork. With that said, she cut angles well being able to set up her takedowns. Her biggest weakness is in fact her takedown defense and off her back, she isn’t too much of a threat. She is able to off her back and is always moving but as in her fight with Virna Jandiroba, she struggles against good wrestlers/grapplers. Overall, she’s still very young and could develop into a top 15 fighter in the next three years.

How she matches up with Wu:

In her debut, Wu was dominated by Gina Mazany, losing all three rounds and being taken down five times. While Wu did get back on the board with a win over Lauren Mueller in her second UFC bout, that loss overshadow the win. Wu may have the advantage on the feet because she just throws more. But with that said, if Inoue closes the distance she should easily get Wu down. The big challenge though is Wu is the bigger fighter with a five-inch height advantage as Inoue is moving up from strawweight. It might be hard for Inoue to get Wu down due to the size advantage. Still, Inoue though has fought much better competition and Wu is at the bottom of the division. The pick here is Inoue as this fight is sure to hit the mat, and her BJJ is superior. 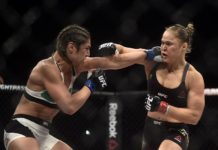